Here’s a message from the creator of the first-ever pop-up ad:

It’s obvious now that what we did was a fiasco, so let me remind you that what we wanted to do was something brave and noble.

It was my intention to take a look at the history of ads to see how we ended up in a world where privacy is no longer sacred and the value of online ads is infinitesimal, even as the entire industry competes for our attention. There is, as you might expect, more than one reason. Too many to count really. But one thing I did learn exploring the early history of online advertising is that it is a road paved with good intentions gone horribly wrong.

The above quote is from Ethan Zuckerman, from an article in 2014, a decade and a half after he helped create the web’s first pop-up ad. In the mid to late 90’s, Zuckerman worked at Tripod, a web platform occupying the same space as Geocities and Angelfire, allowing its users to create homepages on the web for free.

Before it really got going, Tripod had a few start and stops. The company was first incorporated in 1992 with the intention of building a hip, edgy Internet platform for college students, an alternative to something like AOL or Compuserve. But when the founders of Tripod caught wind of the web, they pivoted (as one does) to a platform built on top of the always-on, decentralized infrastructure of World Wide Web. In other words, they built a website. 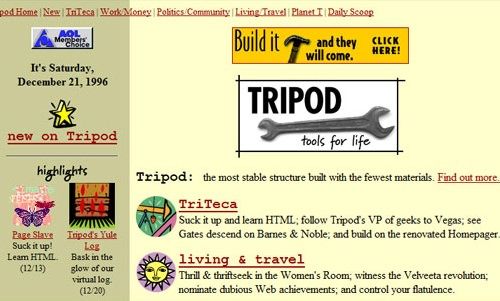 It was more of an online magazine really. Tripod’s website was broken up into a few different categories, like Lifestyle and Careers, backed by an editorial team brought on to manage the content. The site did well, but it wasn’t breaking any records. The web was small enough that any site out there could make an impact but the team hoped that, with time, they could begin to build a community, and lay the groundwork for a creative exchange between their users.

About six months into the site’s launch in 1994, Zuckerman and his team began working on a visual page builder, one that would let users create a simple web homepage on Tripod by just dragging and dropping some images and text. Basically, someone could sign on and, using just a single textarea and a few buttons, build out an entire website. Late one night, they finally got the page builder finished, and threw it up on a separate section of the site (without even asking for permission from their CEO). It was a massive hit. By noon the next day, all of their servers were overloaded. Riding the wave of their success, Tripod doubled and tripled down on their page builder, and their platform became an extremely popular destination for a whole new generation of digital natives testing out the possibilities of the web.

Tripod’s target was college students. In its later years it would also be popular in developing countries. They had a lot of customers that didn’t have access to a credit card, which impacted the way they thought about their business. In order to make sure the site stayed up, and the bandwidth bills were paid, they made the decision to include ads on all of their free sites. At the time, it felt like a reasonable tradeoff for everyone involved. Besides, there was precedent.

Credit for the first ad on the web goes to Global Network Navigator, a Yahoo-esque directory of popular links on the web, launched by the folks at O’Reilly media. The ads featured on GNN where more like sponsored links, included with but separated out from the rest of the content.

But the first ever banner ad appeared on Hotwired magazine, which was the first site to do a lot of things on the web. Even the project itself was a novel idea. Hotwired launched as an online extension of Wired, an already popular and technologically progressive print magazine. The site wasn’t going to just reprint articles from the magazine though. It was to be an independent entity, one with its own rules, and perhaps more crucially to this story, its own business model.

For Hotwired, running ads across the magazine was an incredibly logical choice. They already had connections from their flagship property, and when the site launched in 1994, there was barely a way to collect any money directly from readers even if they wanted to. Ads weren’t really the best choice so much as they were the only choice.

The site’s creators began reaching out to potential advertisers. There was no shortage of interest. Hotwired was sure to be a hit, and plenty of companies saw the value of getting in while the iron was proverbially hot. One of the strongest contenders early on was MCI. But when AT&T, a company struggling a bit to maintain relevance, heard MCI was putting in a bid, they made a play to get their ad up first.

Here’s the thing. No one really knew what ads on the web were going to look like. AT&T gathered together a small team from Modem Media working with an digital agency called Tangent, gave them a deadline of about a week, and told them to figure it out. Again, this was 1994. There was no CSS. There weren’t even that many colors that could be safely displayed on the web. Single column layouts with forced margins and text styles were a designers only real choice. There was a lot of constraints for the team to work within.

What they decided was to keep things as a simple as possible. They created a long rectangular image so that it could run comfortably on top of single column text. They kept the colors sparse, so they would look good even on black and white monitors.

But they also understood that the web was a different medium. The team at Modem and Hotwired didn’t want to just display an image and call it a day, they wanted to embrace the natural interactivity of the web. So the web’s first banner ad was hyperlinked to a new page coded and built exclusively for viewers of the ad. It featured an interactive map that took visitors on a virtual tour of art museums around the world. It was actually pretty incredible.

This is what it looked like embedded on the page. 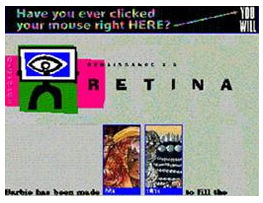 Here’s that interactive map I mentioned.

Here’s what Joe McCambley, one of the people that worked on this ad for AT&T, has to say about the whole thing he started:

Banner ads didn’t always suck. I should know. I helped create the first one.

And he’s right, on both counts. The ad was clever, the tagline was enticing, and it fit in with the message AT&T was trying to convey, that they were a forward thinking brand with their finger on the pulse of technology. The ad highlighted the web more than it did AT&T the brand. There wasn’t a hard sell or even really an attempt to track direct conversions. It was simply a way of elevating AT&T’s profile.

The clickthrough rate for this ad was a staggering 44%. AT&T paid somewhere between $20,000 and $30,000 to run the promotion for a month. Users that clicked through to the next page felt comfortable exploring the experience that the team at Modem had created, and the sales pitch for AT&T was small and unobtrusive.

But smallpox is an especially apt metaphor for the banner ad. It spread like a virus. Over the years, banner ads got more and more popular, but advertisers only recognized the surface value of Hotwired’s ads. They kept the long rectangular format, probably the most superfluous of the decisions the team had made, but removed the clickthrough landing pages and substance. Sites began plastering their pages all over with ads, and inserting them right into the content itself. For most web users, ads just got annoying. And so engagement went down. Way down. Like less than 1% down. Good intentions gone wrong.

This was pretty much the trend when it was time for Tripod to figure out how it was going to pay for all its sites. Their solution was to automatically embed ads, which, felt like a small tradeoff for the free price tag they were able to offer because of it.

There was one issue though. Advertisers didn’t have any control over what type of site their ad would wind up on. When one publisher discovered that their ad ended up on a pornographic site, Tripod began exploring other options for displaying advertisements. Zuckerman wrote a bit of Javascript that took an ad, wrapped it in a small modal window, and had it popup on the screen above the site, allowing users to close the ad and get back to what they were looking at.

The banner ad transformed into the popup ad.

Most of us know what happened next.

Popup ads initially boosted engagement as users struggled to figure out how to even close them. Advertisers mistook this initial boost as a silver bullet and sprinted full speed ahead. Soon enough, one pop-up wasn’t enough to keep revenue going. Then, three pop-ups weren’t enough. It wasn’t long before people ignored them, and a new generation browsers cam bundled with tools to get rid of them altogether.

When pop-up ads eventually faded, it led to a whole paradigm shift in the advertising industry, and a story for another edition: the commodification of our attention and the devaluation of our privacy.

Salon, Slate, and a History of the Tricky Business of Publishing Online

In the first few years of the web's spread to ubiquity, traditional news publishers moved online. But a new kind of publisher was also born, one that was native to the web, with a whole new set of rules.