Before There Were Smartphones, There Was I-Mode

In January of 1999, members of DoCoMo held a press conference in Tokyo, attended by only a handful of people. At the event, they released a teaser video for the launch of a new service. The teaser was vivid. Blobs of all colors streamed across the screen to an electronica soundtrack. This was overlaid with innocuous terms like “Travel” and “Mail.” At the end of the video, DoCoMo revealed the name of their new venture. It was to be called i-mode.

In Japan, much of the population first experienced the Internet through a phone. There’s a reason for that. When the web first came on the scene in the late 1980’s, it was slow to spread through Japan. A massive conglomerate, NTT, dominated the telecommunications network, and heavy government regulations blocked any further expansions.

There were those that attempted to change this of course. The most notable Japanese Internet pioneer is probably Jun Murai, known colloquially as the “father of the Internet in Japan.” He fought hard to make the Internet more readily available. The Japanese people, he argued, were ready to come online. Eventually, Murai was able to inspire initiatives like the Internet Initiative Japan (IIJ), Japan’s first ISP. By 1997, the Japanese government changed course altogether, and began actively encouraging and funding new Internet ventures.

NTT, the behemoth corporation I mentioned earlier, wanted to be part of this expansion. Their area of expertise was phones, so they gathered together a group of executives to start working on new features for mobile devices, still a relatively new technology. They called the group DoCoMo (eventually retrofitted to mean do communications over the mobile network).

The team at DoCoMo was patched together from a group of outliers, those that didn’t fit the corporate mold and were willing to push boundaries. Not everybody wanted to be part of this new venture. There was one executive, however, that was eager to be a part of it. His name was Keiichi Enoki. And he had an idea.

Ironically, because of government growth policies, the NTT telecommunications network was getting pretty clogged. The company needed to reduce calls made by their users. So DoCoMo was tasked with finding a way to keep users on their mobile phones without actually making any phone calls. Enoki thought up a solution. Take a mobile phone handset, and add the Internet. Sure, this would require an always-connected network, but that network would be entirely new.

Enoki got together a group of engineers, brainstormed some solutions, and in 2 years created i-mode.

I-mode took already ubiquitous phone handsets and merged it with a bunch of Internet services, like GPS, banking, and perhaps most importantly, email. Users could toggle between voice features and Internet features on their handsets with a single button.

Almost immediately, the i-mode surged through Japan on an unprecedented scale. By August of 1999, that’s just six months after launch for those following along, i-mode had signed on one million subscribers. Three months later and that had reached three million. By 2001, the company was signing up a million new users every three weeks. So yea, it was popular.

The phones themselves became known as keitai. Competitors, like the J-phone, entered the market with their own versions. Keitai makers quickly realized that their biggest market was in the younger generation, so they targeted their products to the youth, especially teenagers.

These teens took the ketai and ran with it. They adorned phones with snazzy stickers and bought them in a range of colors. They added graphics, ringtones and games to their keitai, patched together to form a unique personality. For these new consumers, their keitai represented a part of who they were. Users embedded their favorite characters into email and messages, inflected with a newly invented dialect full of typed shortcuts and slang. These mobile devices introduced to Japan an entirely new culture. 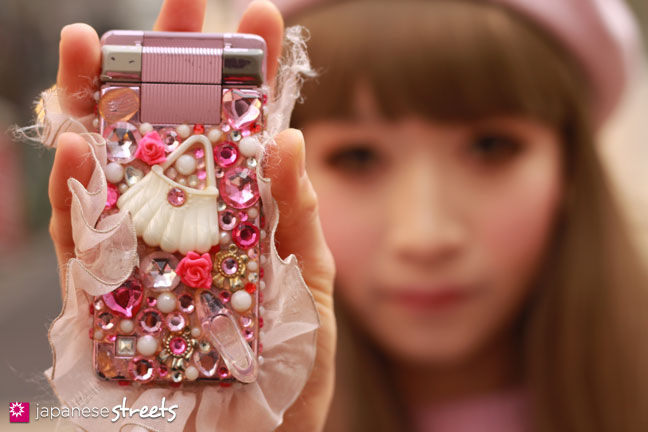 So here’s this whole new generation in Japan, being introduced to the Internet. And for most of them, it was also the first time they ever saw the World Wide Web (you knew I’d get there eventually didn’t you?).

The web on keitai devices represented just a subset of the entire web, a portal like AOL or Compuserve. When i-mode first launched, it had 70 official partners. Users could easily jump to these sites right from their phone’s home screen. Thousands of independent websites were also available, but these could only be accessed by typing the URL in an address bar, one letter at a time, using a keypad.

Keitai screens were… limited. The display wasn’t very big, and there was no color. To meet the needs of these devices, Japanese phone makers created a derivative markup language, compact HTML (cHTML). cHTML was a spinoff of HTML, and included some of the same tags. To optimize content for keitai, though, a whole lot of tags were pulled out. cHTML excluded images, tables, frames, and stylesheets. To cope, keitai-optimized sites often put the most important information for a page right at the top, and left extraneous information and navigation to the bottom, with links to jump down the page.

But the limitations of the phone network brought with it a pretty distinct advantage: micropayments. Every time a user made a purchase on their keitai devices, it would be added automatically to their phone bill. This was incredibly popular, and it made payments super easy, especially smaller purchases (say, a digital sticker for your phone’s display).

A few years after i-mode launched, Google rolled out a special version of their search engine for keitai networks. When accessing a search result on Google, the site would automatically be converted to mobile optimized, cHTML sites and strip out what was unnecessary. That was that. The entire web was now open to Japanese users.

As a result of happenstance, network limitations and some serious creativity, phones became a gateway to the web for many Japanese people. Just a couple of years following its launch, 80% of the population had their hands on a keitai device. But it was the youngest of these consumers that led the way. They pushed the boundaries of what a phone could represent and spawned one of the most unique cultures the web has ever seen: keitai culture.

Bringing the Laughter, Week after Week

The comedy web series was one of the more interesting and influential adaptions of the web medium. It reversed the principles of traditional entertainment to create videos that were more approachable.