eBay, API’s, and the Connected Web

There’s this story about Ebay and Pez that used to go around. It goes something like this:

Pierre Omidyar, the founder of Ebay, was looking for something to do after moving to San Jose from Boston and selling his first startup, an ecommerce pen computing platform named eShop, to Microsoft. At the time, Omidyar’s fiancee had a very specific problem. She loved old Pez dispensers, and was on a quest to collect as many as possible. But her options were limited, even on the Internet. So to help her out, Omidyar built a prototype of eBay on his site to connect her to other Pez dispenser enthusiasts, and things kind of just exploded from there.

That story is (mostly) made up. It was manufactured in the early days of eBay’s rise by the PR department as a way of selling the brand. The truth is actually quite a bit more direct. Scratching his own itch, Omidyar really did create the first version of eBay (originally called AuctionWeb) on his own personal website. But at the time, he was just testing the waters. He listed his own broken laser pointer for sale. Almost immediately, someone snatched it up, confirming that it was broken laser pointers they were in the market for. Omidyar knew he had stumbled onto some huge, untapped market.

So Ebay was set up as this perfect space for people to sell stuff online. About half a decade later, this same motivation led to the decision by eBay to release the first ever public API. But we’ll get back to that.

Omidyar first put up AuctionWeb as a section of his own site in September of 1995. Within a month, more people were coming to the site to list and purchase items. So Omidyar incorporated it as a separate company and moved it to its own domain name. To offset these costs, he began taking a small portion of each sale made on the site. And that’s how the eBay business model was born.

By January of the following year, Omidyar had gathered at least one employee, and brought on Jeffrey Skoll to become the company’s new president. At the end of 1997, AuctionWeb officially became part of eBay.com. That same year, eBay received a large sum of venture capital investment and officially listed its millionth item sold. And on and on it went. 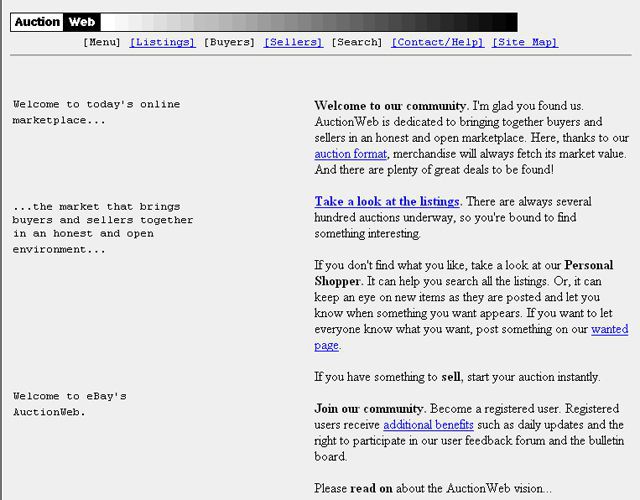 But when Omidyar first bought ebay.com, he filled it with lots of different stuff. AuctionWeb, at the time, was just one small section of the site. It was filled with information about travel and personal shopping and one particularly off-putting tribute to the Ebola virus. In March of 1998, Meg Whitman came on board as eBay’s new President and CEO. Her first step was to get rid of all this cruft, and make AuctionWeb the new eBay.com.

Over her decade-long tenure, Whitman built up eBay, helping the company go public to a soaring IPO just a few months after starting, and acquiring competitors like iBazaar, Up4Sale and Paypal. She helped transform eBay from a place of simple, one-off transactions to a personal destination for a lot of dedicated users.

The site, of course, was not without bumps in the road. On June 10, 1999, eBay actually went down completely. Working through the night, Whitman pulled together her engineers and got the site back up by the next day.

So Whitman understood both the importance of eBay as a full-featured platform, and the value of a broad and solid engineering base. The combination of these prompted the first ever open API the web had ever seen.

An API, in this context, describes a way for web developers to connect to a website and programmatically pull down content. Developers can use this technology to rehash and remix a site’s content, and embed it own their own site, or distribute it across the web. Think of it as a way to directly dig through a website’s data.

eBay wasn’t the first to put an API on the web, but at a time when most of the conversations about API’s were reduced to REST vs SOAP, Whitman and eBay saw through the smoke to its potential business value. In November of 2000, eBay rolled out (to a few select partners at first) their developer-friendly REST API, that allowed programmers to pull anything they wanted from eBay, straight from the source.

Developers at eBay had to be at least partially inspired by the work that was going on at Salesforce. About half a year earlier, in February of 2000, Salesforce publicly announced and demonstrated their own business to business API at DEMO conference. Unlike eBay, Salesforce used XML, but you know, same principle.

Still, the only people that could access the Salesforce API were Salesforce customers. It was built to connect business partners to content. eBay, on the other hand, had a much different problem to solve. They had a very public site, and whether they liked it or not, people were pulling their content and embedding it all over the web. So they opened up their API to everybody. Once their data was standardized, it allowed for things like uniform widgets, structured content, and proper attribution.

eBay’s big (and not-so-hidden) play was to become a sort of “operating system” for e-commerce websites. Business owners could, for instance, list their products on eBay and then use the API to embed these products on their own webpage. So eBay would take care of all the middleman stuff, for a cut of the sale of course, and product owners could focus on just their products.

It was a whole new of thinking about and building for the web. Within a few years, API’s were rolling out everywhere.

Like Amazon, that released a XML-based API of their own in July of 2002. This API was actually a collection of a few tools that let developers not only pull content from Amazon, but actual features and characteristics, like HTML widgets and search bars. They called this group of tools Amazon Web Services, a name which would later be co-opted by a robust cloud infrastructure and hosting service, which inherited the name AWS and at least some of the values and internal design from its predecessor.

But it wasn’t just e-commerce sites that joined the we-have-an-API bandwagon. The bookmarking site Delicious released one in 2003, closely followed by the image sharing site Flickr. Both opened their doors to developers and soon became de-facto web-based platforms for their users (bookmarks and image hosting, respectively). Tech companies soon learned what eBay more or less knew from the start. API’s bring along actual, tangible benefits.

Eventually API implementations smoothed out, and data structures were standardized. Parallel technologies, like oAuth and JSON, rose alongside them. And the web added an extra layer of communication and interconnectedness. Just more machines talking to machines.

How to Use the Web To Show the Truth

Ushahidi is a platform that uses the democratizing power of the web to open access to citizen journalists on the ground and shine a light where the truth is hidden.