In the late 1980’s, Aliza Sherman moved to New York City and took a job in the music business, helping to manage bands like Def Leppard and Metallica. In 1992, she changed gears and began working with the Internet. The web still existed mostly within the hallways of CERN, but Sherman found her place on the Internet, consulting with brands on nascent online marketing campaigns. A couple of years later, she started a non-profit dedicated to helping victims of domestic violence. She created a network of resources for women online, different mailing lists and BBS boards and, later, on AOL that helped women connect, and stay informed.

It was through her work with her non-profit that introduced Sherman to the web for the very first time. In January of 1995 she created her own personal website, “The World According to Cybergrrl”. The name was a mashup of riot grrrl bands, a personal favorite genre of Sherman’s, and her love of science fiction from William Gibson, who coined the phrase cyberspace.

The World According to Cybergrrl was an exploration of Sherman’s own experiences, a mix of links, reviews and personal musings. She used it as a launchpad to start her own web company under the same name. Her focus, though, was on something she had noticed early on. There weren’t a whole lot of women on the web.

Not too long after, that issue was also coming into focus for Nancy Evans and Candice Carpenter with a different platform. When Carpenter first introduced Evans to AOL, she saw it as fairly primitive and underdeveloped. But coming from the publishing industry, she knew that the medium become more refined and intuitive. When that did finally happen, they wanted to not just to be there, but to help make it happen.

Like Sherman, Evans and Carpenter realized there wasn’t really a place on the Internet where women could feel welcome. They had even met with Sherman to talk through that central issue. It was a problem they all aimed to do something about.

Sherman had explored the web quite a bit. She had joined a mailing list or two, but couldn’t really find a dedicated network exclusively for women like her. On her own site, she put up a page called “Webgrrls,” a list of women that had created a unique and thrive space for themselves on the World Wide Web. Then, using the network she had been building for years, she reached out to a few women based in New York City in March of ’95, and proposed a get together of sorts in a trendy new internet cafe @Cafe. To her surprise, around six said yes.

At the designated time, she watched one by one as women came into @Cafe wondering to herself if any belonged to the group she had assembled. Finally, after a bit of time elapsed, she saw one woman walk in that truly stood out from the crowd with an aesthetic and vibe she understood well. She thought to herself, in her words, “THAT’s a Webgrrrl.” She was right. Her name was Phoebe LeGere. She was joined that night by a several other artists and writers, and their conversation buzzed with excitement for the web. 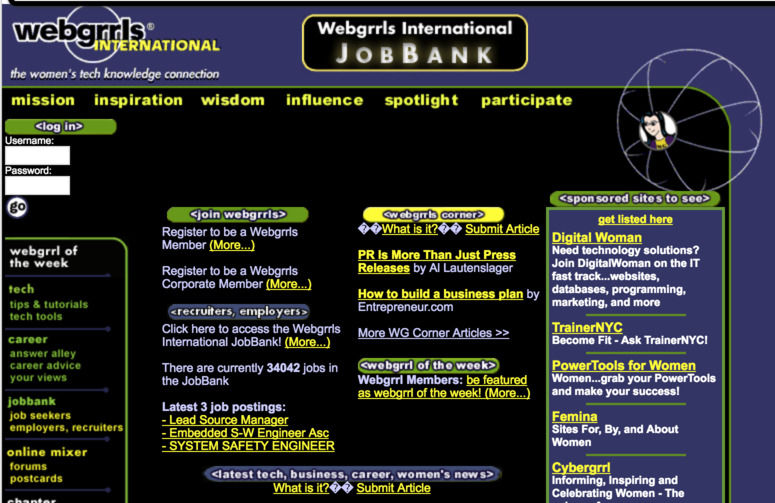 1995, coincidentally, was the same year that Candice Carpenter came to Nancy Evans looking for help with her new consulting client, AOL, though they got their start a bit later in the year. Carpenter and Evans had been friends and professional colleagues for years. They had first met a few years before and almost instantly shared a mutual respect. Over the years, they worked with one another on a few different projects, but never together. With AOL, Carpenter saw her chance.

AOL had kind of a problem. They had done a demographic study of their audience and found that a lot of people coming to their platform were women. With a company that was mostly made up of men (ditto for the entire tech world actually) , there was very little content on AOL for women to explore. Evans, meanwhile, was the editor of a magazine she had herself created called Family Life. Carpenter realized that if they could bring some version of Evans’ work onto AOL, they would be on to something. They decided to start small, targeting parents with a new channel on AOL called Parent Soup.

Evans had been carefully crafting the content for months while Carpenter helped workout the details of its implementation. It was decided that there would be two parts to the site. The first was the editorial content. As Evans describes it, this was the appetizer, a way to get people in the door. The real draw though, was going to be the message boards. This is where women on the we could congregate in a safe, welcoming, and creative space created just for them.

The plan worked. When Parent Soup launched in early 1995, it was greeted warmly by thousands of AOL users that had been looking for something just like it. Right away, women flocked to the message boards to share their stories and show their support in acts of solidarity. Carpenter and Evans realized that this was going to be bigger than either of them imagined. So they decided to rename their site to iVillage.

On the day Parent Soup launched, it was the middle of a blizzard. Evans, living in New York at the time, called down to the tech team she was working with at AOL. Most weren’t even in the office because of the weather. But Carpenter and Evans had made a plan, and they were going to stick to it.

Sherman and the small group that started at an Internet Cafe soon grew beyond just New York City. They went by Webgrrls, continuing to riff of the site that had started it all. They met each month, and every time they did, the number of women in attendance doubled and they had to relocate to a bigger, better space. Six months later, in November of 1995, they held a Webgrrls gathering in the offices of Evans and Carpenter’s iVillage. 200 women were there. . In the group, there was a sense of camaraderie almost immediately, and even though they all came together from different corners of the web, each member knew they could rely on one another to elevate the whole group’s passion and ambitions.

Webgrrls went international almost as soon as it got its start. In Seattle, Betsy Aoki started a chapter with monthly meetings. Then Brenda Leeuwenberg began her own in New Zealand. After that, new groups sprung up in Austin, San Francisco, and all over the world. Sherman continued it to run it as a project of her own Cybergrrl company, providing server resources for chapters and mailing lists operated by Sherman and her team. Each group offered its members daily communication through the mailing lists, monthly meetings, classes on HTML, and networking opportunities.

By 1996, Webgrrls had expanded to 30,000 members worldwide. Even without an infusion of venture capital or outside investors, Webgrrls competed with sites like iVillage and Women.com by making their group essential to women on the web. If you were plugged in to the web community, being a Webgrrrl was a place to level-up, connect with like-minded colleagues and learn about the web. It is hard to overstate the importance of Webgrrls, it was the entry point into the web for thousands and thousands of women, and more than a few of them owe their careers to the group.

All across the country, Webgrrls chapters hosted networking events, and small conferences, and even launched mentorship programs to start teaching the next generation about the web. It was the cornerstone and foundation of women working with and on the web, and the inspiration for dozens of similar efforts that would come next

It was more of a virtual community that guided iVillage. By 1996, the site had moved from AOL to the web, bringing along with it a tone, voice, and direction that was guided by the content of the message boards. Visitors filled the boards with discussions about relationships and parenting and being a woman in the information age. When one user, for instance, decided to try and not bother her teenage kid for a week to see if that might help him behave, dozens of others joined in on the experiment. 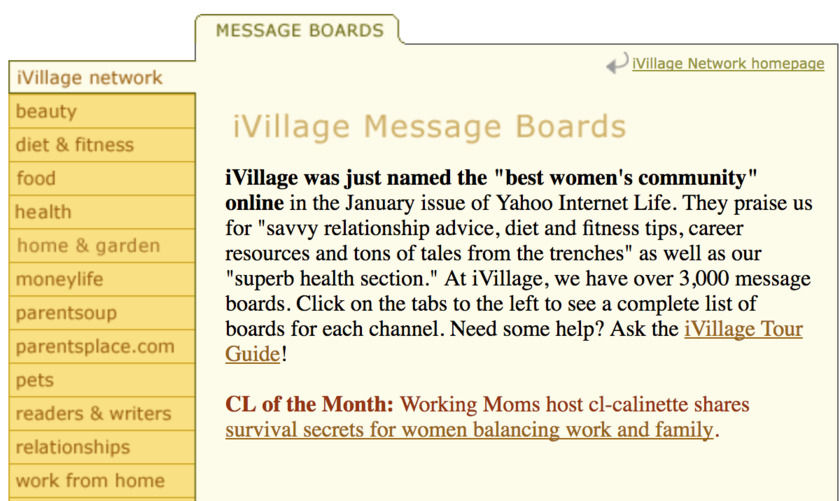 This energy encouraged Evans and Carpenter, and they took their cue from the community. They allowed the conversations of their message boards to dictate the direction and editorial vision of iVillage as a whole, and crafted content that would keep these conversations going. They were, in turn, rewarded by a base of loyal users, visitors that returned to the site daily and helped boost it to one of the most visited sites on the web (consistently at number 6 actually). And when competitors like Oxygen and women.com came along, the community stood behind the iVillage and made sure it was number 1.

The women of iVillage helped to make iVillage. It was a place where they felt they truly belonged.

Sherman, feeling burnt out from running both Webgrrls and Cybergrrl, stepped down as CEO to hit the road and travel for a bit. She handed off control of the organization to the CEO of Cybergrrl, who happened to be a man. Some chapters, that already felt betrayed when Webgrrls made the decision to become a for-profit corporation, split off and created something independent. Today, there are many offshoots of Webgrrls even as the main group continues to operate.

iVillage, meanwhile, was pushed towards an IPO by its investors, resisted from the beginning by Evans and Carpenter. They knew that after the company went public, they would be forever beholden to its stakeholders. They were right. While iVillage did hold one of the most successful IPOs of all time in 1999, it’s popularity took a major dive after that, and eventually Evans and Carpenter decided to leave the company (which eventually sold to NBC).

It may seem odd to mention these two sites together. Their goals and targets and milestones were quite a bit different. And though both eventually found a home on the web, neither started out there. But they both got started at the same time and have at least one thing in common. They created a lasting and welcoming space for women on the web when no one else would. They served as a both sponsor and safety net for these women with large ambitions and imaginations. They carved out a unique spaces, massive ones at that, and proved that the web truly is for everybody. That’s a message that is undeniably important. It’s one worth spreading.

Special thanks to Aliza Sherman for her help with this post.

Way before social media, listservs acted as a glue that held the web community together.