When two sisters hit the web with their new idea, it was unlike anything anyone had seen. That one site, ChickClick, inspired so many more and crafted a foundational network of the early web.

Chapter 4 of my ongoing series at CSS-Tricks about web history is now up! It’s about search. And it all starts with rude robots.

“Girl sites that don’t fake it.” That was the slogan of ChickClick, a network of sites dedicated to giving women a home on the early web. It’s target wasn’t on a specific audience. It wasn’t demographic driven. It invited women of any age and any background to come and chat about anything they’d like. For many coming to ChickClick, it was the first time they were able to speak so freely. It teemed with daily activity, and brought together some of the earliest web-based communities.

At its peak, somewhere near the turn of the century, ChickClick was one of the most popular sites on the web, with traffic in the tens of thousands a day. It had a little something for everyone as long as you were okay with offbeat humor and a Riotgrrl inspired taste.

Nearly 40 sites were part of the ChickClick banner. Some were targeting teen girls. Others went after specific pop culture circles or life advice or politics. They were all targeting real conversations for real women. “We are not your mother’s on-line content providers,” one of ChickClick’s founders would once remark.

The site peaked just before the dot-com boom, but it would not survive the crash. In 2002, it was shut down with little ceremony, leaving only a legacy and an influence on those who had come across it.

Heather Swanson was waiting tables in L.A. when she got a call from her older sister. It was 1998 and Heather was young enough, and savvy enough, to have heard about the web. So when her sister told her about a new website she wanted to build, she was immediately in.

After graduating from UC San Diego in the mid-90’s, Heidi Swanson, Heather’s older sister, spent several years obsessed with the World Wide Web. She spent time in nascent web communities, finding a culture and a group that was still finding itself. The web was rough around the edges and loosely defined. It was those qualities that attracted Swanson to the web in the first place, and she learned enough to begin building websites of her own. She did notice one problem with the web. Very few sites were built by and for women – apart from the more buttoned-up sites geared to an older crowd — and any content that was out there was hard to find.

Swanson sent an email to Chris Anderson. Years after their exchange, Anderson would take over as head of the non-profit organization TED. At the time, he was running a media conglomerate with a network of tech-focused websites and magazines. Swanson asked, in her words, for a “computer and a corner to work in, and my sister and I would run amok.” Anderson was into the idea. So he gave her a computer and a corner. Swanson called her sister, who dropped her waitress gig and headed back home. The two of them called their corner of the web ChickClick, which launched in early 1998.

Within a year, the Swanson sisters were stars on the web. Heidi was the resident “Chief Click”, Heather their “Text Diva.” Each occupied different roles on the site. Heidi was responsible for the tech side of the site, and she oversaw and managed relationships with affiliate sites. Heather answered emails from fans — which sometimes in the hundreds a day — and collected the best articles from around the web to feature on the homepage. Both contributed to the content. Each of their personalities was weaved throughout the site, from it’s aesthetic to its use of language. Regular ChickClick readers were familiar with the Swanson sisters and how they operated. It was one of the reasons they kept on coming back.

The site bubbled up the best links from a network of loosely affiliated sites that formed a tight web ring. The sites are likely familiar to those that have been on the web for some time, Femina, Bust.com, Hissyfit, Greasegrrls. Each of the sites in the webring had the ChickClick stamp of approval. Some of them were even maintained by the ChickClick staff. They dealt with a range of topics, from career advice to Xena: Warrior Princess.

Each day, the Swanson sisters pulled out the best content from these sites and posted them on the homepage, accompanied by an (often snarky) sentence or two. They were loosely organized into a few different categories. Shewire for news, ChickLounge for pop culture, MissClick for teenage content. If you were look at just the homepage of ChickClick, it would look like a Swanson soapbox. Not that was a bad thing. The Swanson’s commentary was infinitely entertaining. It was hard to resist clicking through to a link once they were done describing it.

The homepage, however, was just the surface. If you started clicking around you would find a dedicated community of women that rely on ChickClick as their front-page of the web. The message boards, known as Razzberry, kicked off discussions on literally everything. The Razberry’s homepage was so saturated with content, that on most days it looked like a multi-colored wall of solid text. It was difficult to parse unless you were a regular reader.

ChickClick also hosted ChickPages, a service not unlike what Geocities or Angelfire would eventually become. Users could use ChickPages to create their own “super sassy” homepages, hosted for free on the ChickClick site. It was one of the first (if not the very first) homepage creation services on the web. You could login, add a bit of code, and have yourself a webpage of your own. 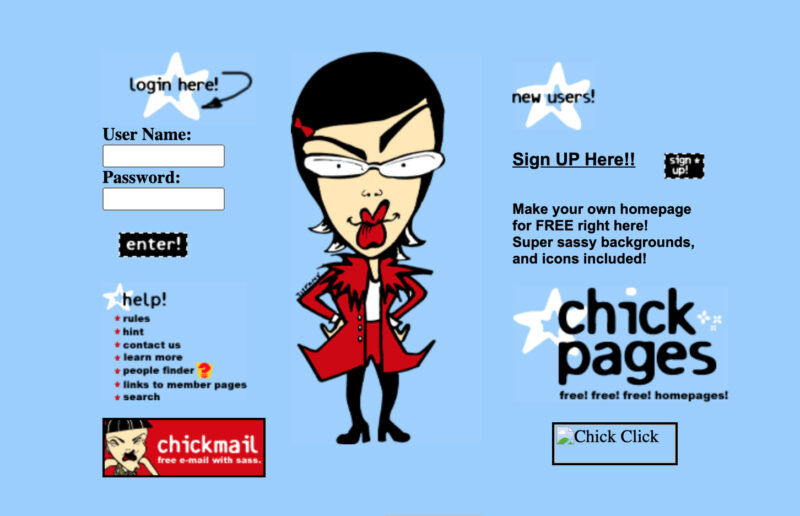 People came back to ChickClick day after day to get that sense of community. It positioned itself as an antithetical cure to the vanilla — and in Swanson’s mind boring — “women” sites. ChickClick was the anti-cosmo, the opposite of sites like iVillage and Women.com. It’s goal was empowerment through content you wouldn’t find on those sites. And it was a success.

What is perhaps most remarkable is that, throughout its tenure, ChickClick was always run by a small group of women. This was at a time when the dot-com bubble was ramping up, and Silicon Valley internet companies were recruiting teams of engineers and content creators in the dozens and hundreds. ChickClick never got bigger than a four person, all-woman team — the Swanson sisters plus editor Beatrice Springborn and sales director Caroline Frye — who were dedicated to the site’s brand and mission and readers.

That was true even when the site merged with Estronet, another popular women’s focused site, in 1999. After that, the site broke up its content into different sub-sites. gURL.net for the teenage crowd, and Estronet for women in their 20s or older. After the merge, site traffic exploded.

ChickClick would regularly launch its sister sites into Internet fame. A feature on the front-page there was worth all the web kudos in the world. An entire community of women grew up with ChickClick as their homepage. It was the first site they came into the morning. It was how they learned about the web. It was an invaluable resource years ahead of its time.

In 2002, after an acquisition by Snowball.com, ChickClick shut down. It’s loyal community wasn’t enough to forestall it’s smaller ambitions against the backdrop of multi-million dollar Internet companies. Maybe we should have kept it around.

In the late 1980’s, Aliza Sherman moved to New York City and took a job in the music business, helping […]