How to Use the Web To Show the Truth

Ushahidi is a platform that uses the democratizing power of the web to open access to citizen journalists on the ground and shine a light where the truth is hidden.

When Ory Okolloh returned to her hometown in Kenya to vote in the 2007 presidential election, she arrived with hope for the future of her country. She was an activist and a blogger, and had run the site Kenyan Pundit since 2005. She had also helped build tools to increase government accountability, and worked with and for NGO’s in Africa. She had helped to make change in her country and many of her fellow citizens, especially from the younger generation, shared her pride.

Unfortunately, what took place after the election was a countrywide crisis. At the end of December 2007, presidential incumbent Mwai Kibaki was declared the winner of the election, but the election itself appeared to be rigged. Protests broke out across the nation, some of which turned to horrific violence and rioting.

Okolloh describes this time as a surreal one. While violent protests shook the country, media outlets largely ignored the crisis. Okolloh recalls cartoons playing on TV at the same time as “you look outside and you’re seeing smoke all over Kibera.” So Okolloh logged on to her blog and started reporting the only way she knew how, with the truth. Each day, she would post a dozen times (or more) to her blog, sourcing locations and reports from her followers and confirming them with her contacts in NGO’s. One of her biggest worries was that the international media was underreporting fatalities and displacements that were occurring in Kenya because they had no access to truthful accounts.

By the 2nd of January, Okolloh returned to South Africa and began thinking through how to solve this issue and give members of the press more accurate information. On her blog, she posted a request for any “techies” interested in creating a Google Maps mashup that would take eyewitness reports and lay them out on a map of Kenya. That’s when Erick Hersman reached out.

Hersman was the son of missionaries, and grew up in Kenya and the Sudan. He eventually set up shop in Orlando, Florida but kept his connection to Africa alive by blogging on his website WhiteAfrican. He had followed Okolloh for years, and when she posted about a Google Maps mashup he saw a powerful idea. Luckily, Hersman was also plugged into the tech scene. And he knew that to really get things moving they would need some additional help.

David Kobia was born in Kenya, but moved to Birmingham, Alabama to attend the University of Alabama. However, he soon discovered web development and dropped out of school to pursue the web as a career full time. Kobia had created the online forum Mashada back in 1998 so Kenyans could come together and discuss politics. But in the wake of the election, Mashada had become a hotbed of indignation and ire. Still exasperated from the election, and now fed up with what his forum had become, Kobia shut down Mashada and got into his car to join some friends for a weekend away. Driving up the interstate through Georgia, he got a call from Hersman. Hersman walked Kobia through the idea. He understood its potential right away, turned his car around, and sped home.

The final piece was to gather people that could help verify and confirm reports on the ground, and at the same time cull through the data and make sure there was a truthful narrative there. That’s where bloggers like Juliana Rotich (who would go on to become the platform’s Executive Director) came in.

In just a few days, this team created Ushahidi.

Ushahidi means “witness” in Swahili. And that’s who the website this team put together was meant to serve. The first version of the site was very simple. A form allowed users to report an incident, be it a violent protest or displaced community, noting the time and location and any details they wanted to include. These reports would then be overlaid on top of a digital map, creating an extremely accurate, real-time, crowd-sourced report of violence and displacement in Kenya. To make this happen, Kobia put together a lightweight application on top of Kohana, itself a a spin off of the popular PHP web framework CodeIgniter.

Every day, more and more reports came in. And Ushahidi grew with them. One of the crucial and early additions to the site was the ability to send reports in via email and SMS. For a lot of Kenyans, computers were not readily available. But most had mobile phones, and being able to send an SMS message made the site much more accessible. And as the conflict began to turn, the team added a “Peace Efforts” category to highlight some of this positive change. 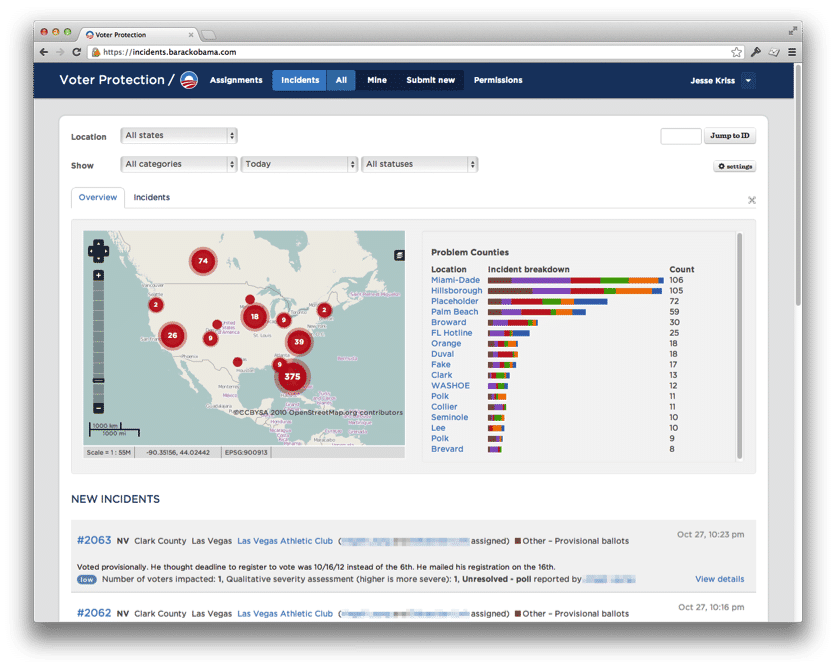 In order to keep the barrier to entry as low as possible, no registration was required to submit a new report to Ushahidi. But absolute truth was quintessential to the project. So as the application progressed, it transformed into a central hub of records from various sources, which Okolloh, Rotich, and Ushahidi advocates could sort through and verify. And in a very short time what had started as a simple technology mashup had evolved into a powerful crowd-sourcing platform.

The site, in many ways, represented the truth laid bare. In a conflict that was difficult to account for and difficult to source, Ushahidi provided the media and the world with access to verified information about what was actually happening on the ground. Just the simple ability for people to identify their loved ones was extremely powerful. In other cases, displaced communities were able to find the help they needed thanks to the platform. But perhaps most importantly, a complete picture of the conflict would help to ensure that Kenya would not soon forget the atrocities that occurred throughout the nation.

The idea resonated. The group soon realized that a site like Ushahidi would be useful outside of just a singular conflict. Originally, they thought they would just open source the site’s code, which they eventually did (it’s up on GitHub now). But visitors poured into the site, and the media reached out to the team for interviews. There was more to be done.

In the coming months, the full team all quit their day jobs to work on Ushahidi full time. With the help of a few grants and an ambitious group of people, the platform was made more stable, simpler to use and easier to implement. Since 2007, it has been used in situations when the truth is vast and hard to account for, in places like the Congo and South Africa. It was utilized by Al Jazeera in Uganada and in the US, by the Obama campaign during the 2012 presidential election and in 2016 to chart citizen-reported instances of voter suppression. Since then, many of the project’s founders have continued work at the organization, though Okolloh continued her career elsewhere, first as Google’s policy manager for sub-Saharan Africa, and more recently, as Director of Investments at the Omidyar Network.

In 2017, an executive at Ushahidi was accused of sexual harassment by a former employee. The details were nothing short of appalling, made worse by the organization’s slow and ineffectual initial reaction. After an investigation, the executive was eventually fired, and Ushahidi has sworn to better uphold the principles that stand at the core of its very creation. But those that swear to uphold veracity and transparency need to be willing to shine that light of truth back on themselves. So I’ll end with the words of Okolloh, in a blog post she wrote in the days after the allegations surfaced called No Sacred Cows.

If we want to protect those working in these areas, or anywhere else, we need to protect the values of respect, equality and openness, not specific organisations or people. The start-up eco-system in Kenya is no longer nascent, it can and must handle the hard work and tough conversations that will happen in the coming weeks and months.

There is no otherwise.

In the late 1980’s, Aliza Sherman moved to New York City and took a job in the music business, helping […]