A Sense of Community: From Newgrounds to MLKSHK

Communities on the web often formed around common interests and niches. As they grew, their utility began to shift to more mainstream elements

Most people think of the web as a magical other life, as someplace else and not, in point of fact, real. That’s bunk. Our web lives are real. So just like real life, communities tend to cluster together around ideas, and form microcosmic subcultures in the process. Sometimes, this leads to terrible groups feeling empowered by their own echo chamber. But as the web grew over the years, other groups began carving out a small space for themselves. Friendly, welcoming spaces with a set of procedures, social norms and unwritten (and sometimes written) laws. They are at once strange and wonderful and anarchic and structured and an important fabric of the web.

There’s a thread that makes its way through these communities. They often start with a simple idea and a domain name. But as that idea begins to resonate out with a larger and larger group of users, the sands shift, and the community transforms the site from the inside in a sort of symbiotic relationship with the site’s owners.

Like, for instance, Newgrounds. Newgrounds was not the first community site on the web, but it was a fairly powerful one that grew organically over the years with, of course, some help from its users.

Newgrounds is Everything, By Everyone

Newgrounds was created by Tom Fulp in July of 1995, at a time so early in the web’s history that CSS was still basically just an idea. It started out as a website version of Fulp’s video game zine, but in the late 90’s, Fulp discovered Flash. He began making some pretty innovative, though fairly controversial, games using Flash and decided to throw them up on the site so others could play. These games were primitive, but they resonated with a good amount of people. And Fulp built a following.

In April of 2000, he officially made Newgrounds a community by opening up a new section of the site called The Portal, allowing anybody to submit and post content to the site. This was just the chance a lot of Newground visitors were waiting for. They quickly posted games, artwork, and videos in the hundreds, soliciting feedback and creative inspiration from others. Fulp’s followers flipped the script. As The Portal grew, Fulp took the lead from his new community and began to hear them out when they wanted something new. Which is why Newgrounds was the first site to allow user voting, the first site with ad monetization and hosted the first ever “viral” videos the Internet had seen. 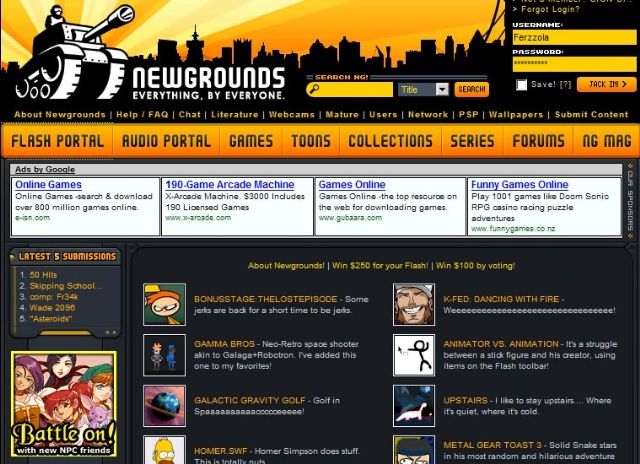 During this time, Newgrounds adopted a new slogan. “Everything, By Everyone.” This wasn’t just lip service, it was a statement.

The site welcomed users with cheeky handles, like LegendaryFrog (creator of One Ring to Rule Them All) and the Super Flash Brothers. These creators brought a raw aesthetic to the site, which began to find a true niche with budding amateur animators experimenting with Flash for the first time. The community grew together, and users learned from one another, even informed one another’s style.

By the time Newgrounds reached it’s peak in the mid-aughts, it was leading a new animation revolution. There are quite a few professional animators that got their start posting to Newgrounds. Like Studio Yotta, a pair of Newground devotees that have since animated shows on Cartoon Network and Nick.

Web communities, though, come in different shades, there’s hardly a mold that can contain them. So someone could take the Newgrounds formula, spin it around, change it here and there, and create something entirely new. Which is exactly what happened with DeviantArt.

DeviantArt is transformed by its users

DeviantArt launched in August of 2000, and was originally just a user submission extension of the DMusic Network, a site owned and operated by one of the three DeviantArt co-founders. Its expressed purpose was to collect user contributed Winamp skins. But that purpose didn’t last long. Within months, users had flooded the site with submissions from across the creative spectrum, from comics to drawings to animation. Through a little bit of direction from the site’s creators, and a whole lot of creative exchange and chance, the DeviantArt community found one another.

If Newgrounds was subversive and organic, DeviantArt skewed more towards the whimsical and polished. At the center of it all was the profile page. It stood as an online extension of its user’s artistic identity, decorated with their latest “deviations” freely organized into very neat (or very messy) directories. Each time a user posted something new, they could solicit feedback from and toss around ideas with a group of collaborators and fans.

These pages became a place of conversation and confidence, and a way of announcing ones artistic endeavors to the world. It was extremely personal and the members of DeviantArt were particularly picky about the amount of control they were given over these pages.

Because, as you probably know, site owners and their community don’t always agree. Which tends to lead to some friction. In 2009, DeviantArt put up new share icons next to each deviation, which allowed visitors to post to social media platforms, and even embed images on their own site.

The only issue was, these buttons were not optional. And sharing might be a given today, but it wasn’t always. Some members even saw the act of sharing as equivalent to that of stealing. At the very least, giving users access to an embed link made art much easier to rip off. Others had simply built semi-private pages and followings for themselves. They knew they could be found (everything was public after all), but that it wasn’t very likely. Sharing threatened the foundation of this idea and some users most sacred of spaces.

At the behest of their users, DeviantArt eventually made these share links optional.

Still, sometimes it’s actually the comfort of sharing, rather than the joy of creating, that brings together a community. That’s what happened with FFFFOUND! an image bookmarking platform first launched as a side project of the Japanese web design firm Tha. Years before Pinterest or Tumblr, FFFFOUND! allowed users to post images, and assembled them thematically in a grid.

FFFFOUND! was all about the journey though because in the end, FFFFOUND! users just didn’t care much about the destination. Each image could be liked by a user. That’s pretty standard. But the action wasn’t an isolated one. Each time you liked an image, your profile would automagically connect with it, and a list of other images you had liked in the past would now be shown on that images page. So posts weren’t linked by rigidly defined categories, but by ever-evolving subjectivity (a concept which appears to allude modern day image platforms). This allowed visitors to bounce from image to image, threading through the loose connections between each as they explored. 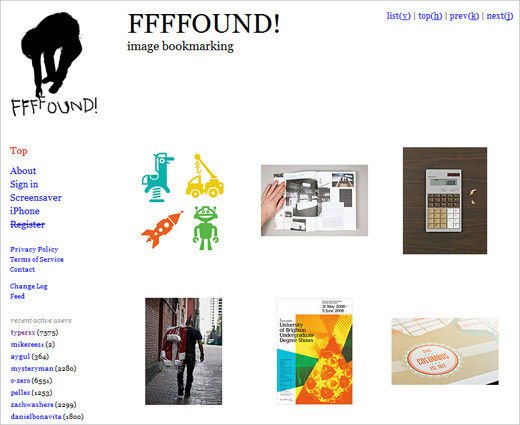 Through it’s tenure, FFFFOUND! kept things invite-only, keeping its growth slow, but entirely deliberate. The design harkened back to the Brutalist early designs of the web, stark, direct and without much flourish. Discovery was key, and there was really no need to distract from that. Even the logo was preposterously simple, a stylized shadow of a person bending down to pick something off the ground. Though relatively small among other online behemoths, it wasn’t long before FFFFOUND!  had, uh… found itself a dedicated group of users.

MLKSHK finds meaning in the mundane

MLKSHK was equally beloved, and formed, by its users. The site came a bit late to the game, created in 2011 by Amber Costley and Andre Torrez, though its actual roots stretch back a bit before that. Like FFFFOUND!, MLKSHK allowed users to post images up and share it with other users on the site. But that’s about where the similarities ended. Images shared on MLKSHK were grouped together into “shakes”. 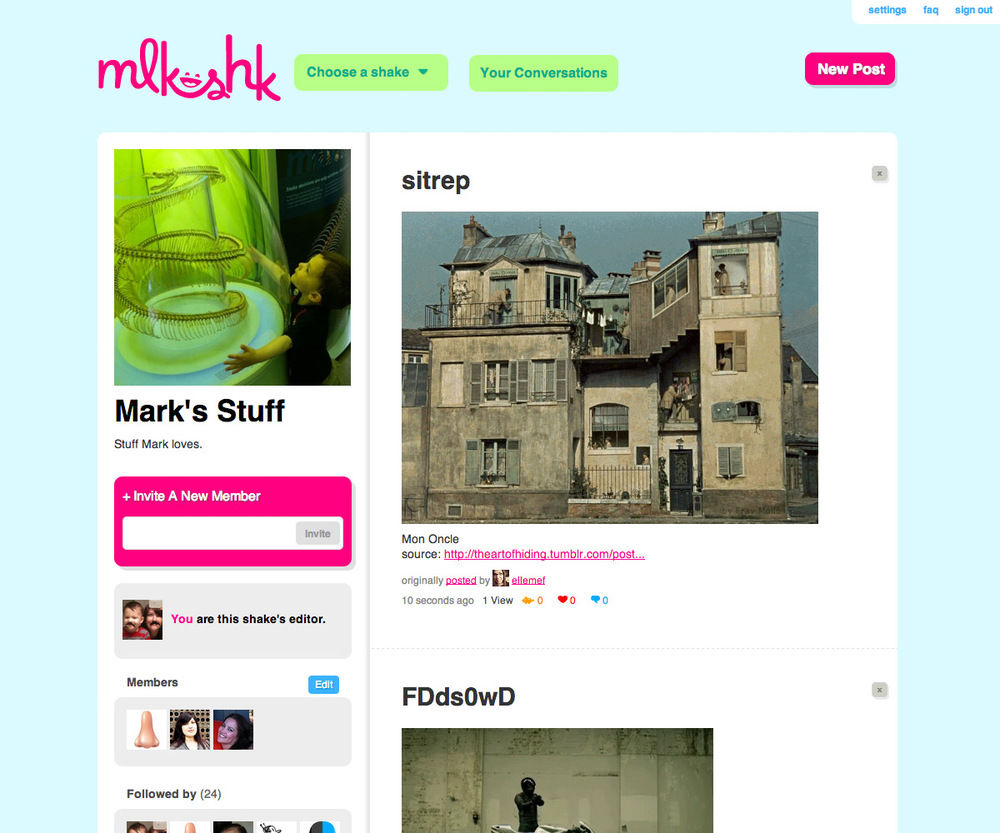 Again, MLKSHK evolved right alongside its community of users, a zealous and expansive group with a constantly shifting set of ground rules. “Shakes” were the currency of MLKSHK, and users swapped shakes and saves and likes and comments as a way of getting to know one another. The site gave the user’s a format, but the user’s gave the site a purpose. They created avenues for discovery and etiquette for interaction. At the heart of the matter was an exchange, of ideas and of content. It’s what led one user to exclaim:

For me – this interaction between like-minded individuals is one of the most interesting things about the whole site. It’s more than just people throwing up funny images for all to see – it’s people who share something having a visual conversation with each other. We are the audience and we are the show.

As the web has grown, online communities have become centralized walled gardens à la most modern social media sites. Places where ideas mostly spread from the top down, rather than the center outward. It’s left an unfortunate vacuum of creativity and expression where we are left to simply shout into an indifferent void.

As of this post, in mid-2017, both MLKSHK and FFFFOUND! have announced plans to shut down. Newgrounds is still very much in operation, but its staff and audience are a shadow of what they once were. Pretty much the same is true of DeviantArt.

My point, if there is one at all, is that there’s room for all sorts on the web. Some would have you believe that these communities are vessels of groupthink and homogeneity. I think the opposite is true. Funneling all of the web’s thoughts into one of only a few options has smoothed out a multiplicity of voices into a monotonous tone.

There’s an alternative, and the early web showed us the way. At their very best these communities are about finding meaning in something you didn’t even realize a whole world of people were already interested in. A group eager to root for you and grow with you and learn from and with you. A community of peers that can’t be measured by impersonal metrics and canned statuses. And perhaps most importantly, each different from the next, grounded in a different perspective and inclusive of thoughts from outside.

So I guess what I’m saying is, if we wanted it to be, the web could be a conversation. We need only to look to the past to see how.

When two sisters hit the web with their new idea, it was unlike anything anyone had seen. That one site, ChickClick, inspired so many more and crafted a foundational network of the early web.