It’s 1997 and you want to build a website. You have some options.

At a baseline, the web is made up of a handful of technologies. In 1997, there was some technical documentation to wade through, but there were only a handful of things to learn to get started making websites.

…by reading a book

You may have actually had the most success at your local bookstore or library. The web was fairly new, and digital publishing was far from the norm. So a lot of information about the early web was being distributed through a growing number of books that targeted web newbies.

Bebo White began his career on the web at Stanford’s SLAC lab, helping to build the first website in the U.S. He joined the WWW Wizards at Stanford, a voluntary organization that assisted, through message boards and mailing lists, newcomers to web building. White is also responsible for one of the first books to deal in the theory and practice of building on the web. Published in 1996, White’s HTML and the Art of Authoring for the World Wide Web wasn’t a short book, but it was comprehensive. If you were looking to get started on the web, it was a great place to start.

But by 1997, there were other options available. Jennifer Robbin’s Designing for the Web, Lynda Weinnman’s Designing Web Graphics, and Elizabeth Castro’s HTML for the World Wide Web were all published in 1997, or just prior. They offered technical and practical advice for web beginners, as well as detailed walkthroughs for creating graphics for the web, and using them to build websites. Picking up a copy of any of these books would get you going in the right direction. 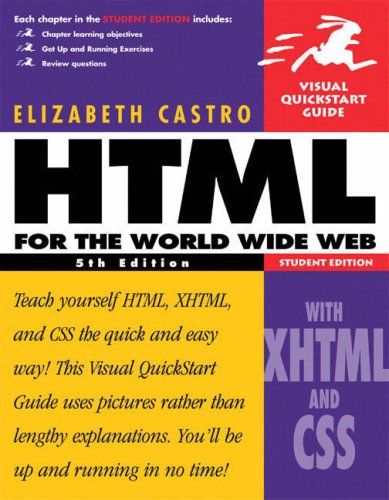 But the most consistent and prolific publisher of early web books had to be Laura Lemay. Her first entry into the web was in 1995, with Teach Yourself Web Publishing with HTML in a Week. Plain spoken, pragmatic, and bundled with a CD full of code examples, the book became a near instant success—at least among a still relatively small number of budding web developers. Lemay quickly followed up her first entry with one book after another, all variations on the same theme. Learn a web technology. Fast. Teach Yourself Java in 21 Days, Teach Yourself More Web Publishing With HTML in a Week And so on.

Blurring the line between digital and book publishing, Lemay’s books were rarely finished at the time of its publications. She would consistently released updated editions as web technologies evolved, and offered corrections and updates right on her site. Lemay’s ongoing series, revised editions, and fresh takes on web topics would become a foundation for lots of people learning the web. Plug into that as a foundation, and you’d be all set. 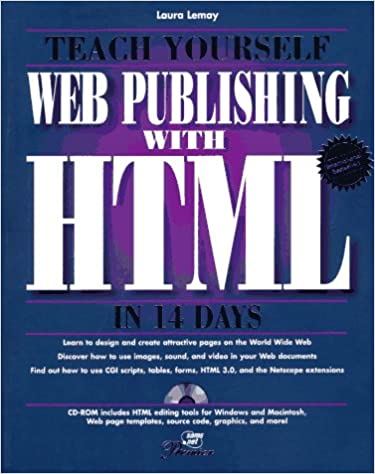 …By Surfing the Web

For somebody surfing the web in 1997, a book might feel a bit… 20th century. If you already knew the basics of getting online, why not poke around some sites that might help, right there in your browser. .

Wired—in a project cooked up by the site’s own developers—launched Webmonkey in 1996, one of the first major efforts targeted specifically at web designers and programmers. Over time, the site built up a roster of web practitioners that freely shared tips, tricks, and best practices for building websites. The webmonkeys, as they would often call themselves, prided themselves on their down to earth and practical approach. Not to be outdone, CNET launched Builder.com in 1997 with contributions from Charity Kahn, Dan Shafer, Frederick Paul and a host of big names in the emerging web design and development field. These sites might feel expansive, but they were full of helpful tips. 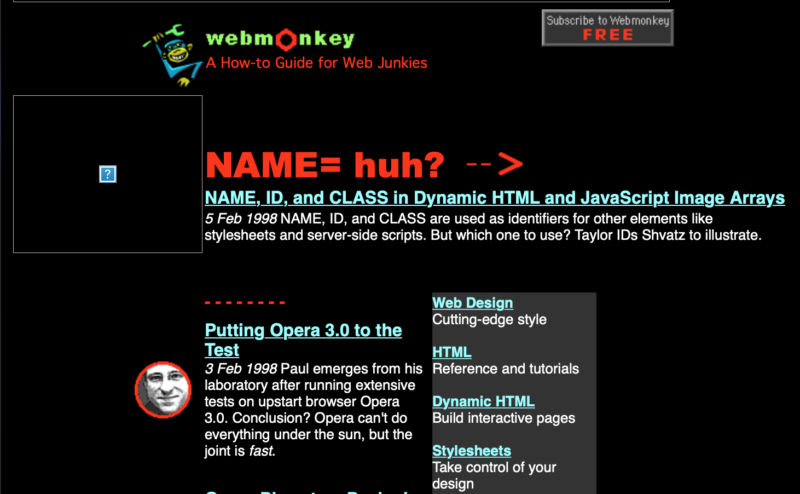 But you want more. You want something dynamic, sleek, and cutting edge. For that, you’ll have to push out one level deeper into the web, to an expanding network of amateur teachers and active web developers posting tutorials to their personal sites. You might find yourself at Glenn Davis’s Project Cool or Dori Smith’s Backup Brain or Nick Heinle’s Webcoder, or any number of small sites maintained by a single person and full of excellent code examples and tips.

So if you wanted to build your website yourself, learning it on your own took some dedication and time, but it was certainly doable.

Option 2: Let Someone Else Do It

Let’s face it, the web is complex. And you don’t have the time or resources to figure it out. It’s time to turn to the experts and let them handle it.

Maybe you just need a simple homepage. Maybe it was a newsletter for your family reunion, or a digital tribute to a pop icon. A few pages, some images, and that’s it. There was no shortage of free homepage options out there if you knew where to look. Geocities launched in 1995, and likely had the biggest presence, but they were already being challenged by Tripod and Angelfire. The offer on the table was fairly simple: 15MB and a domain, plus some basic tools for getting started. The rest was up to you.

In some cases, though, you didn’t need to look any further than your own Internet provider. ISPs like AOL, Netcom and CompuServe added free webpages to their monthly packages. They tended to be a bit more powerful and customizable than your average free homepage site, a good match for a small business looking to start recruiting customers online.

Most had integrations with more advanced tools, like Microsoft Frontpage, which made it easier to build websites using drag and drop tools, though that came at a cost. So if you were a step up the complexity latter, your ISP might be the right way to go. There was a catch though. Smaller providers would sometimes pop up, capitalizing on the rapid rise of the early web offering generous site builder packages, only to disappear months later. You might have a perfectly functioning website one day, and nothing but an error message the next. With no proper backup, there was often no way to get at a site’s content or data. Best choose wisely.

Another option is to turn to a patchwork of freelancers and server administrators that, together, would be able to provide a compelling experience on the web. The earliest roots of web design had its foundation in print and graphic design, and it was very common for graphic designers to go about designing a website the same way they might design a magazine spread or brochure (that’s why, when Lynda Weinman published her first book about the web, it’s focus was entirely on graphics).

You’d need a bit of expertise to translate a design into a working web document, but there should be plenty of people out there willing to lend a hand.

By 1997, it might not have been common, but it was at least somewhat expected that businesses would have some presence on the web. Which offered opportunity. Brick and mortar stores operating in a small local market could go worldwide overnight. To help fill that gap, a number of digital agencies—with a framework and process mostly borrowed from the advertising industry—began assisting with building websites.

For those that fell in the small business category, there was a whole network of amateur web practitioners who came to the web early enough, and spent time learning the web early enough, that they could effectively build out website presences for small and medium businesses. Most of them were the outgrowth of personal experimentation, that individual designers and developers spun out into separate businesses.

David H Dennis, for instance, documented odd things he found around the web on his main site. But one page on his web, amazing web internet creations, offered his services for clients looking to get into the web game. Dennis was responsible for several sites on the early web.

Be careful with your choice of agencies, though. By 1997, there were already large, “digital media” agencies like Razorfish, Agency.com, and Organic that were starting to build momentum. They offered more than just a website. In their loftiest marketing materials, they offered companies a digital revolution. A complete presence on the web that prepared you for the next millennium. Be careful though. These agencies came with a hefty price tag. It might cost tens of thousands of dollars just to get started.

If you wanted a website in 1997, there were lots of ways to do it. And don’t worry, you’ll probably have to build another in a couple of years anyway!

CaringBridge: A Community Grown with Love

Web communities started small, and many began with purpose. They radiated out from a single source, spread through close-knit circles […]