One Step Ahead: How Pinboard Beat Delicious

On December 16th 2010, sometime in the morning, employees at Yahoo gathered together for an all-hands staff meeting, addressing some concerns from employees after a pretty serious round of layoffs. In the middle of a presentation from Yahoo’s executives, one of the slides featured a hastily arranged collage of Yahoo service’s logos, arranged in three separate columns. In the first column, marked Sunset, you could just barely make out the logo for the social bookmarking platform Yahoo had acquired a few years prior called Delicious.

Within minutes, the screenshot had leaked and bounded from one end of the web to the other, spread through Twitter and tech media outlets. Wild speculation and hot takes more or less converged on a single explanation. Delicious was going to be taken down.

By 11:30AM that day, Pinboard signups skyrocketed and almost took down the site down.

Pinboard had always been a small fish in a very big pond. If you ask it’s creator, Maciej Cegłowski, he’ll tell you he likes it that way. Cegłowski built out the first version as a side project in 2009, after Yahoo had redesigned Delicious in a way that was especially unappealing to its long-time users. The first version of Pinboard that Cegłowski built was everything that he liked about Delicious, stripped down to the bare essentials. It was quick and easy to use and not all that fancy. Then he started charging for it.

Which, at the height of Web 2.0 and even after the lessons that came from the dot-com bubble, is still a pretty big deal. It was almost unheard of in Silicon Valley to actually charge for a service; failure was guaranteed. But membership to Pinboard cost users a one-time flat fee, just $3 initially. Each time a user bought in, however, the price rose by a tenth of a penny. It was enough to incentivize early adopters, who were in some small way, rewarded for taking a bet on the new service. 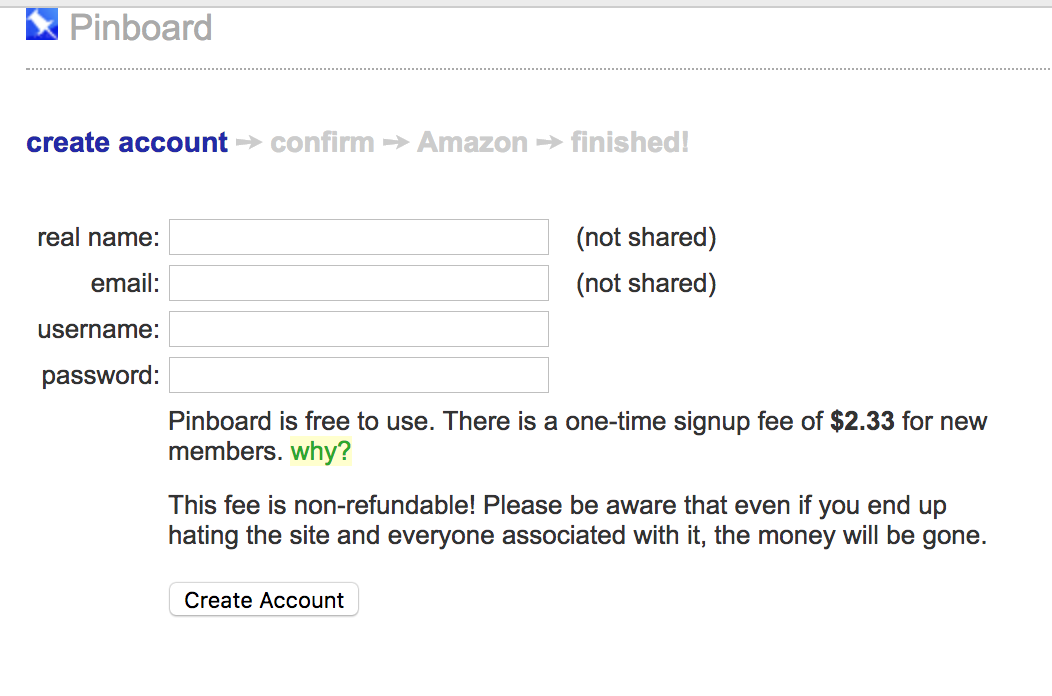 The basically nominal fee doubled as a barrier to entry too high for spammers and the uncommitted, leaving space for only dedicated users willing to at least reach in their wallet. As Pinboard slowly grew, Cegłowski recruited Delicious co-founder Peter Gadjokov to help with some technical issues. They added some features here and there, but more or less doubled down on simple.

Then someone leaked that slide (pictured above). No one knew what to do. What about their data? Was Delicious being retired? What does sunset even mean? As users panicked, flanked on all sides by uncertainty, many people began recommending Pinboard as an alternative. The service even allowed users to import bookmarks from Delicious with a simple click of a button. It was perfect.

A few months before Yahoo’s announcement, Cegłowski and Gadjokov had spun up a completely different project called the Bedbug Registry, collecting horror stories and potential solutions for bedbugs. The site ended up in a CNN article, traffic spiked, and the site went offline for some time. To make sure it didn’t happen again, they increased their server capacity well beyond what was needed. Pinboard was on the same server. If it hadn’t, the site would have almost assuredly crashed. 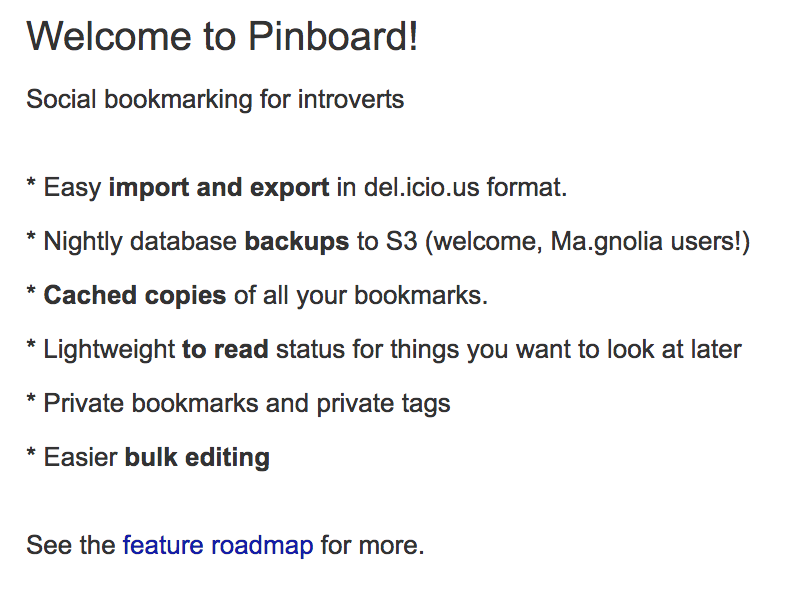 But it didn’t crash, even as users led a mass exodus away from Delicious, fragmenting out across the web’s offerings, and more than a few finding their way to Pinboard. As the day dragged on, Pinboard’s traffic soared an order of magnitude higher than anything the team had ever seen. Cegłowski hurriedly answered support emails while he and Gadjokov raced to patch their server configuration. Some services had to be shut or slowed down, including the Delicious import feature, which required some explaining to concerned new users. But Pinboard stayed up.

By the time the dust had settled, Cegłowski was left with 16,000 subscribers, up from just a few thousand a couple of weeks earlier.

Pinboard got their next boost again from Delicious, when AVOS media, run by YouTube founders Chad Hurley and Steven Chen, bought the platform. As is almost tradition in acquisitions, the site was once again redesigned. In the process, they removed a pretty crucial feature, crucial not because of its ubiquity but because of fandom.

The fanfic community, fans who lend their words to stories involving characters from beloved pop culture touchstones, carved out quite a home for themselves on Delicious. Fans gathered stories from all over the web, and organized them into neat, hyper-organized tags, using special symbols (*, /, -, etc.) to denote connections and hierarchy. One of the most popular was the / symbol, slash fiction being one of the more common and popular types of fan fiction, and the symbol itself signifying pairings between characters.

AVOS’ redesign of Delicious removed the ability to search using the / symbol, and fans were left with no alternative. Cegłowski understood fandom because Britta Gustafson, a former community manager at Delicious, had shown him how important the culture was. Cegłowski reached out on Twitter to the community letting them know that, in fact, Pinboard supported the / character and just about any other character you wanted to use, just fine. He asked if there was anything else they’d like to see added to Pinboard, and was rewarded with a 53 page document outlining possible fixes, complete with organization, a table of contents, etc. It’s truly a fascinating story, which I can hardly do justice, but you can read more about here. Needless to say, even more people came to Pinboard. 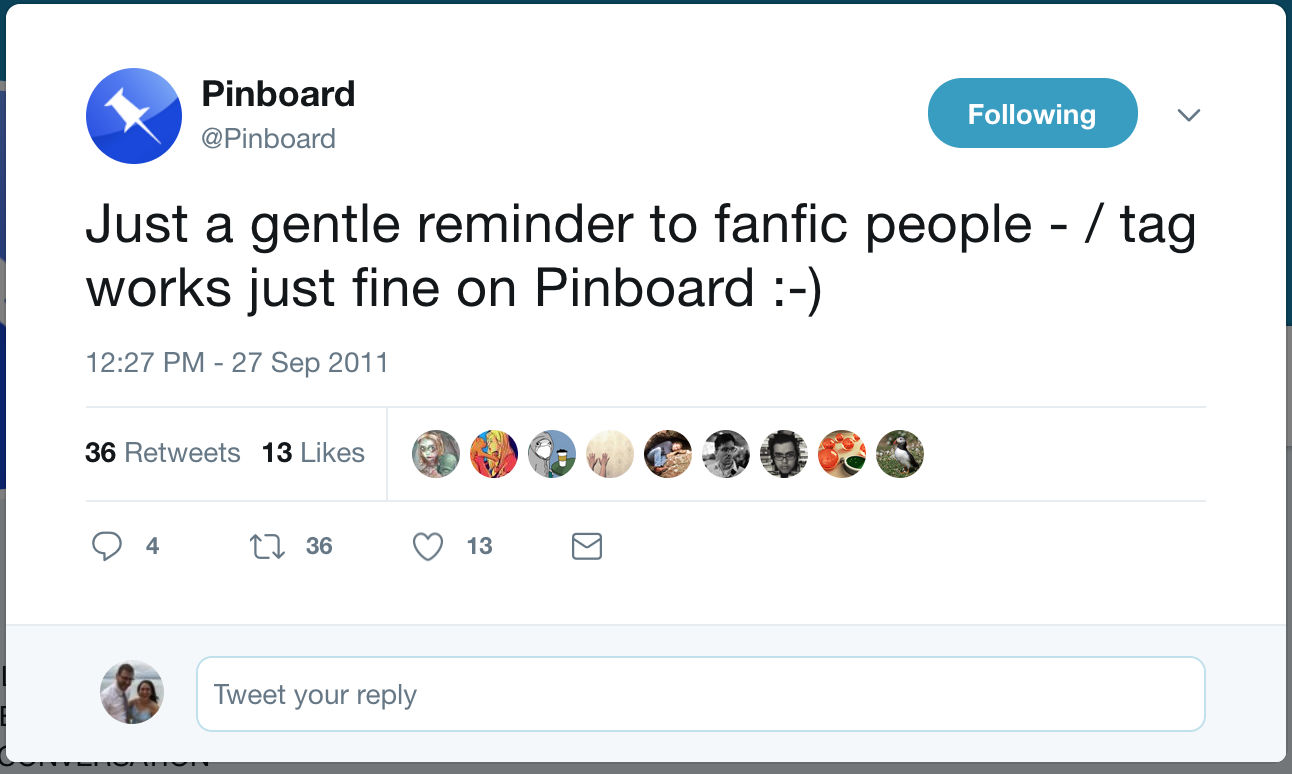 In July of 2017, after Delicious had been sold on no less than four occasions, Pinboard made its final move. For just $35,000, Cegłowski acquired Delicious. Check and mate.

He announced that the service would continue, but users will no longer be able to create new accounts. He has plans to fix the export tool so users can also move wherever they want. In a final note, he wrote:

Do not attempt to compete with Pinboard.