The Day the Web Died

On August 7, 2010 Wired declared that the World Wide Web was dead.

The cover that graced the newstands that month featured a bold orange background splash with large black text words that simply read “The Web is Dead” (pictured above). The release was provocative and timely, just a few months before the 20th anniversary of the web.

In the feature article titled The Web Is Dead, Long Live the Internet, writers Chris Anderson (then editor in chief of Wired) and Michael Wolff (writer of Fire and Fury: Inside the Trump White House) traded point for point a laundry list of reasons why the web was officially DOA. Top of their list was the emergence of mobile apps and the walled gardens of social media which rested lightly on the protocols of the web but more or less sidestepped its open and decentralized spirit. The web may still be around, the argument went, but more and more users were leaving it to find greener pastures in different Internet watering holes. 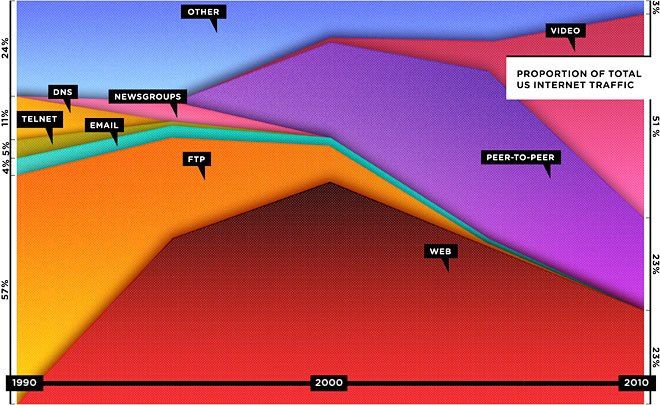 The centerpiece of the article was a large, two-page graph that tracked the share of Internet traffic from the largest Internet-enabled platform, like FTP, Email, and of course the web. The evidence appeared damning. Sometime around 2000, the web peak, accounting for about 50% of all Internet traffic. By 2010, when the article was published, that number had dropped to less than 25% thanks to the influx of mobile apps, online games, and video streaming services.

This wasn’t the first time a publication sang the web’s swan song. It wasn’t even the first time Wired did it, they made the same guess for the web way back in 1997. People have been predicting the end of the web since the web began.

Thankfully, the web was not quite ready to die. And there were plenty of proponents of the open web ready to prove why.

Criticisms of the article poured in from, I suppose ironically, the web. One such argument came from an article in Scientific American written by Tim Berners-Lee, the inventor of the web, and edited by Mark Fischetti, who had helped Berners-Lee write a book on the web’s origin story called Weaving the Web. In it, Berners-Lee restated the founding ideology of the web, that of universality, openness, and innovation. These ideals, he argued, were enough to keep the web going for years to come.

But the biggest blowback came from Rob Beschizza, writing from the then-still-pretty-small link blog Boing Boing. In his article, Is the web really dead?, Beschizza takes special exception to the graph that forms the centerpiece of the Wired article. He pointed out that the graph itself tracked the percentage share of Internet traffic, not actual total usage, which completely undermines the simple fact that between 2000 and 2010 Internet traffic in generally literally exploded, even if it became more evenly distributed across multiple platforms.

If you were to take into account the actual total usage of Internet traffic, Beschizza, you might find yourself coming to a much different conclusion. The web’s growth over that same decade was actually increasing exponentially, just like everything else on the Internet. It’s just that other Internet uses were starting to take some of that share.

The NY Times picked up this story in their BITS blog, and little by little the news spread across media outlets. The web was not dead after all. And when somebody was ready to declare so, there were plenty of people ready to fight back.