Trying (and Failing) to be Cool

The web’s turn into commercial may have happened quickly—it was largely complete by the end of the 1990’s—but that doesn’t mean it didn’t take a turn into the weird here and there. Case and point: Zima.

The website for the short-lived, now forgotten, clear malt beverage known as Zima did not change the web’s landscape. It was not transformative. It was not the beginning of a paradigm shift. It was like a lot of other websites at that time. But that time happened to be 1994—early in the web’s history—and it’s approach to the web is instructive about where everyone thought it was all going.

In 1991, the Coors brewing company surveyed thousands of people. What they learned was that about 60% of people weren’t satisfied with the types of alcoholic beverages available on the market. They spent the next two years—two full years—working on prototype after prototype for a new product offering. The result was Zima, a lightly carbonated “clearmalt” beverage with a relatively low alcohol content and, according to Coors, a refreshing taste.

Zima hit the stores in 1993, just as Generation X was coming of age. Coors positioned their new product as a the obvious choice for the latchkey generation, their marketing a blend of ironic aloofness and down-to-earth cool that was all too common in the ’90’s. However, the folks at Coors also realized that Gen Xers were tech-savvy—the first to take confident steps into cyberspace. Zima would need a website.

Rather than rely on traditional marketing efforts, Coors reached out to interactive agency Modem Media for help. Modem had gotten its start in the late ’80’s before the web was even invented. In the beginning, they experimented with multimedia marketing on CD-ROMs, but within a few years they had picked up a national profile building virtual malls for online networks like GEnie (run by General Electric). By the time the web hit, Modem’s half-decade of experience in computer advertising made them seasoned experts. Zima, however, would mark their first entry on the web.

For legal reasons, Zima couldn’t sell their product directly to consumers via the web. But that hardly mattered; Modem had something much bigger in mind. They knew that digital-minded Gen Xers would never go for that type of obvious, corporate-tinted direct marketing. They needed to make Zima a destination, a brand synonymous with Generation X nightlife; the life of the party, the counter-culture drink of choice. They needed to make Zima cool. What they built was one of the first branded websites, an interactive experience targeted at creating a dedicated portal of cool stuff for the digital demographic.

Zima.com launched in 1994. Hotwired—an early web only publishing magazine from the create of Wired—launched not long after, and a link to the Zima website was one of the first ads displayed on their site.

The site creaked open when you visited its homepage, the “Fridge” (the literal sound of an opening fridge), a metaphorical navigation tool used to bring visitors from one section of the site to another. r. The page featured an actual picture of fridge, “its primary responsibility is to store the Zima, just like any other fridge in America,” the website boasted. Items stocked on the shelves of the fridge were clickable and could jump you off to other pages on the site. The link marked “Diversions” featured a few games to play. The “Icons” link a number of downloadable icons for your desktop. 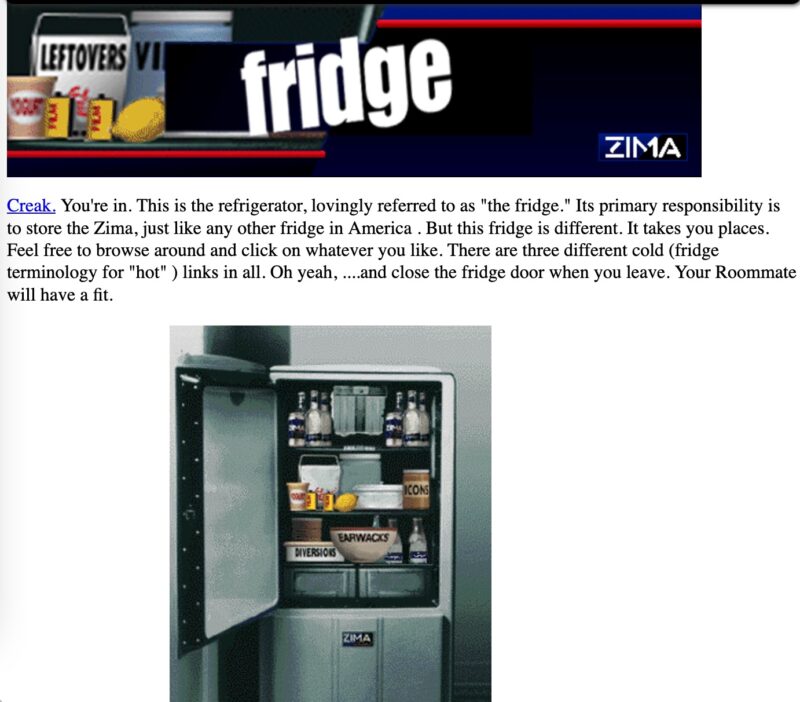 This was not your typical brand website, and that was kind of the point. The site was meant a destination, a place where visitors could get lost for a few hours and maybe think about Zima from time to time. And even all of those distractions were just window dressing for the real focus of the site: Tribe Z.

Not anyone could be in Tribe Z, also referred to as the “Freezer” section of the site. You had to fill out a questionnaire about your alcoholic beverage choices and demographic information — invaluable to the Coors marketing department and low-friction enough to get responses. Once you had access to Tribe Z, you could get exclusive email updates, the chance to win free prizes, and you could even help determine the future design of the site. This may all feel like brand marketing 101 on the web these days (we are more than inundated with prompts to signup for exclusive loyalty programs) but Tribe Z did have one unique piece to it. His name was Duncan.

Duncan was not a real person. He was a fictional character crafted the image of Generation X caricature to embody the brand of cool that Zima was selling. Duncan was your guide to Tribe Z, and the Zima website. He would bi-weekly installments from his life in the form of short, quippy posts that Tribe Z members could read. Through these fictionalized stories, Duncan would recount his nights of partying — always with a Zima in hand of course — and his efforts to woe his unobtainable tryst Alexandria.

Through Duncan, the Coors brand hoped to connect to their consumers in a way that felt authentic. Everyone knew that Duncan was fake, but at least he was cool and fun to read about; a simulacrum constructed in the service of selling clearmalt drinks. Before the site even launched, Zima had collected 8,000 members to Tribe Z. At its height, it would have nearly 100,000, and the site would be visited at least that many times each month.

The Tribe Z site stands out, because it represented the influence of advertising and marketing in the “real world” invading the digital space. The repackaged angst of the MTV generation being sold by the media industry was not unique to Zima, it was plastered all over the skateboard wielding, grunge listening, slackers that popped up in commercials and TV shows. But the web, in its earliest academic and largely isolated incarnation had managed to avoid that type of commodification.

Then Duncan comes in with his apathetic edge and a bottle of Zima and his blog and changed all of that.