Has the web become more productized?

ReservationHop was instantly popular, and almost equally vilified. It was criticized as unethical and aggressively opportunistic. Though the site framed it differently, Mayer was essentially holding reservations for ransom and putting them in the hands of people willing and able to pay. By circumventing restaurants entirely (he used fake names for the reservations than passed them on to people that paid for them), he was putting restaurants in a position to lose money from last minute cancellations. ReservationHop wasn’t strictly illegal, but it certainly walked the line of fraud. 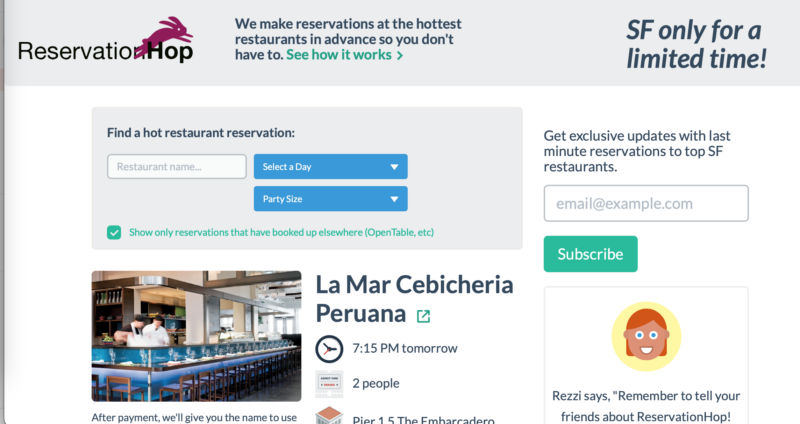 Mayer took to his own blog to defend himself where he explained that the site was a bit of fun, a clever solution to a real need. His site was, after all, very popular. There was a market there that didn’t previously exist, and Mayer was there to fill it. As for the ethical concerns, he wrote most of them off. “To be honest, I haven’t spent a lot of time thinking through these questions. I built this site as an experiment in consumer demand for a particular product, and the jury’s still out on whether it will work.” ReservationHop eventually tried to include restaurant’s in its process before shutting down entirely.

Reflecting on the site this past year, writer Cory Doctrow positioned ReservationHop as just one example of a much longer tradition of websites attempting to squeeze money out of everyday interactions or instances of bureaucracy. He cited other examples of websites that circumvent or otherwise ignore the norms, ethics, and laws tied to those interactions, sites like MoneyParking, which let users auction off parking spots they had no legal right to, and Enq, which ties up IRS phone lines so they can sell that spot to the highest bigger, Doctrow claims that the end goal is “Markets in everything!”

Despite making the headlines, “markets in everything” extends well beyond the ill-intentioned. The web is highly distributed and widely accessible, and since almost its early days, largely commercial. Beginning with the rise of the dot-com startups in the 1990’s, and the subsequent collapse of the dot-com bubble, the commodification of the mundane has spread further and wider into different subcultures and ideological manifestations—the gig economy, drop shipping, hustle culture, the rise of SaaS, startup evangelism.

After the dot-com bubble, the web of the 2000’s, often referred to as Web 2.0, saw more dynamic applications like Flickr, Google Maps, and Delicious. Technologies like AJAX and Flash and philosophies about the web’s interactivity introduced refinements and polish to web design. Surfers of the web after the turn of the century ditched their hang-ups about entering their credit card online, or making large purchases over a computer. The web became something relatively familiar to large parts of the world.

The web proved itself as a platform for experimentation in niche services and products. There are those, like ReservationHop, that use that lack of friction to attempt to circumvent norms or laws in search of profit, And there are many more who provide perfectly legitimate one-off services at fair prices to groups large and small.

By the 2010’s, the web was awash with such products. So much so that in 2013, Ryan Hoover, fresh from working at a web startup and co-authoring a book about internet products, began to look for better ways to catalog them all. He started with a list, which he called Product Hunt. Each day, Hoover would add a list of new products he found to a list he published on the web (he even used one of those products, Linkydink, to collect and share those links). There were more than enough new things to populate the list—usually small startups built by one or two people introducing some quick and easy service via the web, a bookmarking tool or drawing app or list of curated content—and within a few weeks hundreds of people had subscribed. Hoover recruited a small network of contributors to help him fill out the ongoing list, and updates continued to stream out every day. 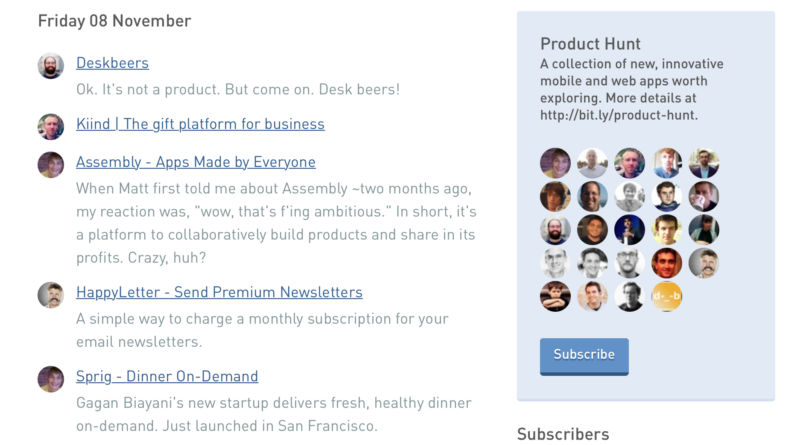 With the help of Nathan Baschez, Hoover took his list and created a website of his own, launched in November of 2013. They added new features to the site, discussion forums, job boards, and more community features. But fundamentally the concept never changed radically. A daily updated list of new websites or apps which visitors to the site could browse and upvote. In July of 2014, less than year after its official launch, Product Hunt received the backing of Y Combinator.

Product Hunt rode the wave of the productized web built on services and applications. Some were dispassionate ideas barely thought through like the infamous Trash Day, which hired people to take trash from inside your house and move it to the outside. But most services sought to connect people with real life needs, either by making experience in the world easier, or by amplifying digital life with an ongoing service. These products often adopted the Software as a Service (SaaS) model. SaaS was made largely popularized by Salesforce, but it had a growing presence throughout Web 2.0. The goal was to provide an ongoing service that continuously improves billed month to month, rather than a single package of software purchased once. 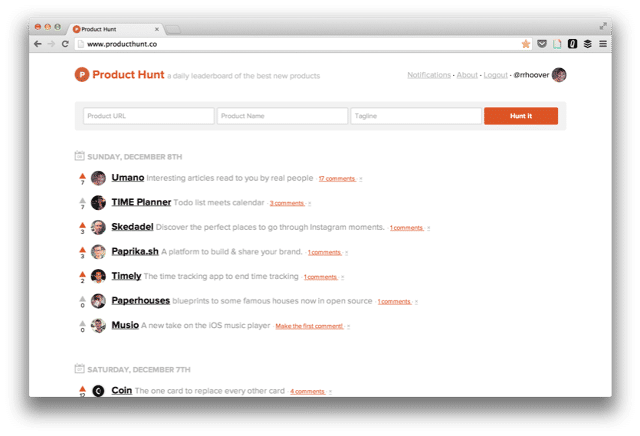 Over time, Hoover—and others like him—adopted a set of rules that define the web’s product culture. Find a niche. Optimize for engagement. Capture a market. Incentivize influencers. These rules spread through a network of social media accounts and blog posts from proprietors of online products, repackaged and reframed across different types of subcultures and businesses.

The product web has come to encompass a large part of what it means to exist on the web. It’s shifted the way we think about our day to day experiences. One website at at time.

This is what you're nostalgic for

There's a word for what you're feeling. It's anemoia. And it's completely made up.