While working at CERN, Tim Berners-Lee first comes up with the idea for the World Wide Web. To pitch it, he submits a proposal for organizing scientific documents to his employers titled “Information Management, a Proposal.” In this proposal, Berners-Lee sketches out what the web will become, including early versions of the HTTP protocol and HTML.

Col Needham publishes a few Unix scripts to a Usenet group for browsing and searching through a user generated index of movie lists subdivided into several categories. He calls it the rec.arts.movies movies database. Years later, Needham and a few others would move the interface online and incorporate officially as IMDb.

The Web’s First (And Second) Browser

Tim Berners-Lee releases WorldWideWeb (later Nexus) on Christmas day, the first ever browser for the web. It is far from primitive, featuring a built-in HTML editor alongside graphical features. However, it is only available on NeXT machines and fails to gain much traction. 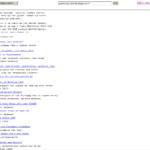 What the Web Could Have Been

Before the web, Gopher offered a way to connect to the Internet and share documents. And if things had gone a little differently, it might even be what we use to surf information today.

Engineers at the University of Minnesota develop Gopher, a new internet protocol and early competitor to the web. Gopher organizes documents using a tight hierarchy that can be accessed through Gopher clients, similar to web browsers.

Nicola Pellow finishes work on the Line Mode Browser, a text only CLI-based browser for accessing the web. Because of its simplicity, the browser could be easily ported to a variety of operating systems making it incredibly popular despite a limited feature set.

Brendan Kehoe, while inquiring about a troublesome user on a Usenet newsgroup, coins the phrase “net-surfing.” Over time, surfing the net, will become a more or less common idiom.

In order to keep tabs on new websites, Tim Berners-Lee creates a hypertext list on the CERN site he calls the WWW Virtual Library. To get on the list, site owners could personally email Berners-Lee their link, and he would add it. The Library would later move to its own site.

The Importance of Being on Usenet

Ever wondered how people found about the web. The first transmission of its existence was a digital one, a Usenet post that sparked a following of early web pioneers.

Berners-Lee, responding to a thread on the alt.hypertext Usenet newsgroup, publicly announces the World Wide Web project for the first time. In the coming months, Berners-Lee would use other newsgroups to help spread word about the web.

Tim Berners-Lee publishes the first website as a way of both demonstrating what the web was, and explaining it’s purpose. It ran off of Berners-Lee’s NeXT computer and included a list of links to other relevant CERN documents. It would be the point of discovery for many early web adopters. 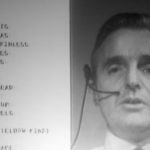 A Brief History of Hypertext

Hypertext simply means text that links to other text. It’s a concept that predates the web by several decades, though experiments with hypertext inspired its creation.

Tim Berners-Lee publicly links to a draft of HTML on the www-talk mailing list. HTML is a hypertext markup language used by developers to create websites, and is the foundation of the WWW. The language itself was influenced by similar efforts like SGML, but has since evolved into a lot more.

As part of his specification for the World Wide Web, Tim Berners-Lee introduces HTTP as a way for clients (web browsers) to communicate with servers. The first draft, HTTP v0.9, includes only one method, a GET request, used by clients as a read-only way to retrieve web pages. 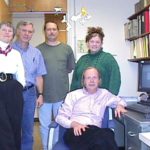 A team at the Stanford Linear Accelerator Laboratory launches the first web server and website in the United States at slac.stanford.edu. The website is notable for its connection to the SPIRES-HEP database, a digital repository of tens of thousands of particle physics papers that gave instant utility to a still incipient web.

After helping to launch the website of SLAC, Louise Addis forms the WWW Wizards group. The group would go through a few name changes over the next few years, but they were crucial in helping users understand how the web worked, both at Stanford and around the world through active development contributions and support of web creators.

Notable as the first browser developed outside of CERN, ViolaWWW was a browser developed by Pei-Yuan Wei while working at UCLA Berkley. The browser was an experiment, meant to demonstrate the power of Wei’s scripting language, Viola, the browser was among the first to render tables, scriptable objects, and stylesheets and would serve as a template for many of the browsers released in subsequent years.

There’s this scene in the second season of The Crown (if you watch enough old movies, you’ll see the same kind of thing). The scene depicts Princess Margaret, away from England and distraught after hearing news of a former love, as she attempts to get in contact with her sister, the Queen of England. She tells […]

Tim Berners-Lee presents the Uniform Resource Identifier (URI), later renamed to the Uniform Resource Locator (URL), to the IETF. The URL is one of the founding technologies of the web, and is a standards that dictates how web page addresses are constructed, allowing browsers to easily connect to documents across the decentralized network.

BBEdit releases the first version of their text editor with the unique slogan “It doesn’t suck.” A few years later, BBEdit 4.0 would make HTML editing a core feature, with support for syntax highlighting and uploading directly to a web server.

Lynx was a text only browser created by programmers at the University of Kansas. Though it ran entirely inside of a terminal, and therefore had a higher than average barrier to entry, it nevertheless provided users with basic formatting and keyboard shortcuts for navigating the web. One of its creators, Lou Montulli, would later become one of the founding members of the Netscape team.

Veronica is created as a new Gopher server type specifically built for indexing and searching other Gopher servers. Veronica was able to index results from thousands of servers at time, and translate a text based search into a list of available documents.

Originally known as the Common Library, libwww offers a programatic foundation for creating browsers. Tim Berners-Lee salvages a lot of code from his WorldWideWeb browser in order to create the package, and releases it open source to a growing web community. It would aid in the creation of over half a dozen browsers in under a year.

Tony Johnson, a researcher at SLAC, develops MidasWWW. It runs on Unix machines and is not dissimilar from other graphical browsers at the time with one notable difference. It could display PDF documents in browser, a key feature for scientists and academics hoping to browse the web for research papers.

The Origin of the IMG Tag

NCSA releases Mosaic version 1.0, developed by Marc Andreessen and Eric Bina. It features inline multimedia, an easy to use GUI, and visual elements for web designers to make use of. Soon after launch, Mosaic would become the most popular browser on the market.

CERN puts the Web in the public domain

At the urging of Berners-Lee and his team, and thanks in part to the downturn of Gopher after they began charging for their protocol and software, CERN officially enters the World Wide Web into the public domain, making it freely available to anyone. It is perhaps the single most impactful decision made on behalf of the web, and enabled an entire generation of programmers to extend it, build with it, and spread it.

NCSA, the company behind Mosaic, creates What’s New, a webpage that highlights the most popular new sites updated every weekday. The page is added to the Mosaic browser homepage and receives quite a bit of traffic.

How We Searched Before Search

Believe it or not, there was a time before search engines. Discovery on the web was far more difficult. It was easy to get lost. That is, until a few different people created a map.

Using web crawling technology he invented, Matthew Gray develops the World Wide Web Wanderer. The WWWW collects data about websites and stores it in a single database called the Wandex, offering some search-like functionality and a snapshot of the web’s global usage and spread.

A three day conference aimed at bringing together the greatest minds on the web and organized by Dale Dougherty at the O’Reilly offices in Cambridge, Massachusetts. It was the first time that Tim Berners-Lee shared his idea for a web consortium, and included discussions about the future of web technologies and the ideological aim of the web project.

Often referred to as the web’s first commercial publication, GNN is an interactive guide to the web that contains news stories and links to popular sites. It is updated regularly and would later become the first site to experiment with advertising.

Oliver McBryan develops the World Wide Web Worm (WWWW), one of the web’s first search engines. Most search engines of the time were manually curated, but the WWWW automatically crawled sites and kept them in a database, then matched them to user queries. It would not be released until March of the next years.

Oscar Nierstrasz publishes W3Catalog. The website is able to automatically compile several curated lists, like What’s New and the WWW Virtual Library, into one place using a web scraper built by Nierstrasz.

Started by a few students at UC Santa Cruz, the IUMA is at first a simple FTP drive of MP3 files from lesser-known bands that anyone can download and listen to for free. When the idea goes viral, the group begins soliciting submissions from bands around the world and builds a website to organize tracks and quick download links.

Dave Raggett publishes HTML+, a specification that extends HTML which had, at the time, grown stagnant. Included in HTML+ are many features that had already been implemented by browsers, such as tables and advanced forms. HTML+ would go on as an inspiration for HTML 3.2.

The Common Gateway Interface is formalized as a standard by the NCSA Mosaic team. It allowed web servers to connect to more advanced scripts to generate dynamic HTML content. This allowed developers to execute programs from the server to do things like track visitors, process forms, or update content on a page.