By 2000, Salon had made quite the name for itself with their quick, pithy headlines and stories that posted all hours of the day, around the clock. Their coverage of President Clinton’s impeachment trial was particularly exhaustive, with up to the minute updates multiple times a day. It was the closest you could get to watching the whole thing live. Then there was their singular effort to bring to light the alleged hypocrisy of Henry Hyde, a member of the Senate Judicial Committee who was involved in a romantic affair of his own during the impeachment proceedings.

There were a lot of other news outlets that could’ve ran with the Hyde story, but Salon was the only one to give it a chance. Editorially, it was the kind of balance the magazine was known for striking – at once salacious and investigative – earning them an infamous notoriety in the press while simultaneously making them an oft-cited source by news outlets around the world.

The latter of these two distinctions was why they felt it necessary to cover the nascent presidential campaign of ultra-conservative Gary Bauer in early 2000. There would be plenty of others looking to them for reporting ramping up to the election. The former, their modern online chic and bawdy reputation, is why the journalist they chose was Dan Savage, media pundit, activist, at times bombastic and a self-proclaimed, proud leftist.

The result was a story titled Stalking Gary Bauer (pictured above). In it, Savage eviscerated the agenda and ideals of the homophobic candidate and his potentially malignant policies. To gain access, Savage signed up to Bauer’s campaign as a clandestine volunteer. The day before he started, he had contracted the flu. In an extravagant attempt to sabotage Bauer and his campaign, Savage “started licking doorknobs. The front door, office doors, even a bathroom door. When that was done, I started in on the staplers, phones and computer keyboards.”

It was a flashy bit of gonzo journalism. The kind of writing that had come to be expected from both Salon generally, and Savage specifically, as purveyors of a journalistic style that stood outside the mainstream – in tone if not in all out approach. It was a style familiar, emulated, and refined by a small cohort of online-only, early web adopter publications, not the least of which was Slate, Salon‘s occasional rival.

Salon and Slate had gotten their start around the same time, and under unusually similar circumstances. They were also competing for the same audience, and a bit of bravado was to be expected when each publication tried to prove that its slice of the pie was the biggest. Over the years a rivalry had emerged, and it was not at all uncommon to see shots fired across the bow from one publication to another in the form of jabs buried in online columns, sometimes even authored by David Talbot – editor of Salon – or Michael Kinsley – editor of Slate.

In 1999, Salon went public and the windfall from their IPO left them with cash to burn. In an incredibly short period of time, they expanded their staff, moved to new offices, and dramatically improved their readership. Some critics, however, saw the IPO as nothing but a black magic cash grab, warning that it would only end in collapse (they were right, of course. Salon, along with most of the web, would lose a ton of cash flow when the dot-com bubble burst). And wouldn’t you know it, one of the most vocal of these critics was Michael Kinsley.

Kinsley took to his weekly column in Slate to criticize Talbot, and Salon, for the supposed frivolity of a publicly traded news organization cashing in on its internet cred for a massively ballooned but short-lived valuation. By the end of the year, Kinsley made a habit of pointing out the discrepancies between the financial milestones Talbot would often tout in press interviews and the much-lower numbers public reports seemed to indicate.

Talbot’s response to these charges was routinely curt. Salon was a better publication, IPO or no. That’s why, at the end of 1999 and beginning of 2000 at least, they had more readers, better coverage and more mass appeal. 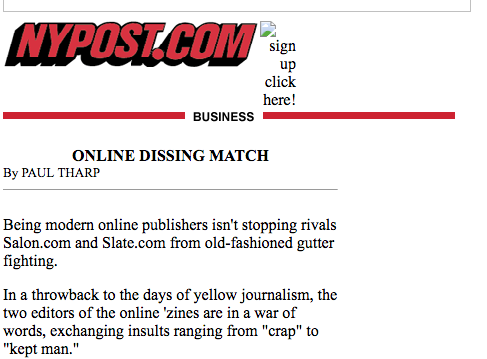 The feud escalated for months before coming to head in February of 2000, less than a month after Savage posted his flu-spreading expose. A particularly brutal exchange was chronicled in the New York Post under the garish headline (a style the Post has all but mastered), ONLINE DISSING MATCH ; SALON, SLATE HONCHOS’ SNIPING GETS PERSONAL. In it, Talbot, along with Salon‘s Vice President began with their usual logic: Salon was more popular because it was better. Period.

This set Kinsley off. In his response, Kinsley referenced Savage’s latest piece:

We have buzz, too — we’re not all that straightlaced. But we don’t have to go around licking doorknobs. . . .

This certainly didn’t help end the feud. Talbot fired back, labeling Kinsley as Bill Gates’ “house pet.” The rivalry was left hanging in the air, and the two went back to running their publications.

That is, for at least a month.

In March of 2000, Kinsley published an article on Slate titled “Nyeh Nyeh Nyeh“. In it Kinsely presented evidence which, in his estimation, proved that Slate had overtaken Salon in terms of monthly readership. He also went point by point through all of the attacks leveled against him trying his best to deflect or disprove each one.

Eventually, the fight fizzled out. Both were consumed by larger ambitions and mostly went their separate ways. But it’s always interesting to observe when a traditional pattern moves to a non-traditional medium. Rivalry between news publications is, after all, nothing new. It’s just interesting that it moved with news media’s transition to the World Wide Web. And perhaps even stranger that it kicked off with a few licked doorknobs.

The Day the Web Died

On August 7, 2010 Wired declared that the World Wide Web was dead. The cover that graced the newstands that month featured […]