What Is a PC Bang?

While looking into the rather storied history of Internet Cafe’s, I found myself following a kind of tangential story about cafe’s that opened up in East Asia. As it turns out, they took an entirely different form there.

One of the first Internet Cafe’s, named simply Electronic Cafe, opened up in Seoul, South Korea in 1988, at a time when the web was just an idea ruminating in the mind of its founder. The shop offered its users telephone-line connections to the Internet and spaces for conferences.

Technologically speaking, South Korea was super prepared for the Information Age. Early on, their government had begun building infrastructure to support relatively cheap, high speed internet connections. By the late 90’s, a good amount of South Koreans even had Internet wired up in their homes. So the whole idea of a place that was not quite digital and not quite physical, allowing users to pop in and check their email or chat with some like-minded, computer literate people was quite appealing. Most of these cafe’s opened up near universities, and the clientele skewed young. By 1998, these cafe’s became known as PC Bangs.

The PC Bang, Bang translating loosely in Korean to “room,” kind of erupted on the scene. They differ from your average Internet Cafe in a number of key ways. The most important of which is that PC Bang’s are designed around gaming. Users at a PC Bang login to a variety of different online, multiplayer games, connect to high-speed Internet, and get to work. And a bunch of things converged all at once to make it happen.

The one everybody likes to point to is the release of Starcraft in 1998 by Blizzard Entertainment. The game was widely anticipated, near cinematic in detail, and massively multiplayer, meaning there was some central servers players could connect to in order to play with other players around the world. Or, you know, in a PC Bang down the street.

The game just kind of clicked in South Korea, and it’s still pretty popular today. A huge amount of young South Koreans started visiting PC Bang’s daily to login, connect and play for hours and hours. But there was a reason they had the time to do that. Because the weird fun fact is that originally PC Bang’s were supposed to be called “Jusik-Bang’s,” which translates to “stock trading rooms.”

In 1997, a pretty broad range of circumstances led to a major financial crisis in South Korea. They appealed to the International Monetary Fund (IMF) for help, which was given on the condition that the South Korean job market and economy be restructured, and more evenly privatized. Which eventually helped the country, but left a lot of people out of work.

That means a whole lot of young people found themselves without a job, so they turned to self-employment and cheap housing. When you’re young, have a little bit of extra cash (PC Bang’s, to this day, are pretty cheap) and a bunch of time, a massively multiplayer game that plugs you into an entirely new digital landscape is pretty appealing. “Jusik-Bang’s” weren’t going to work. Stocks just weren’t really on people’s minds. So stock trading rooms became gaming rooms, and gaming rooms exploded. 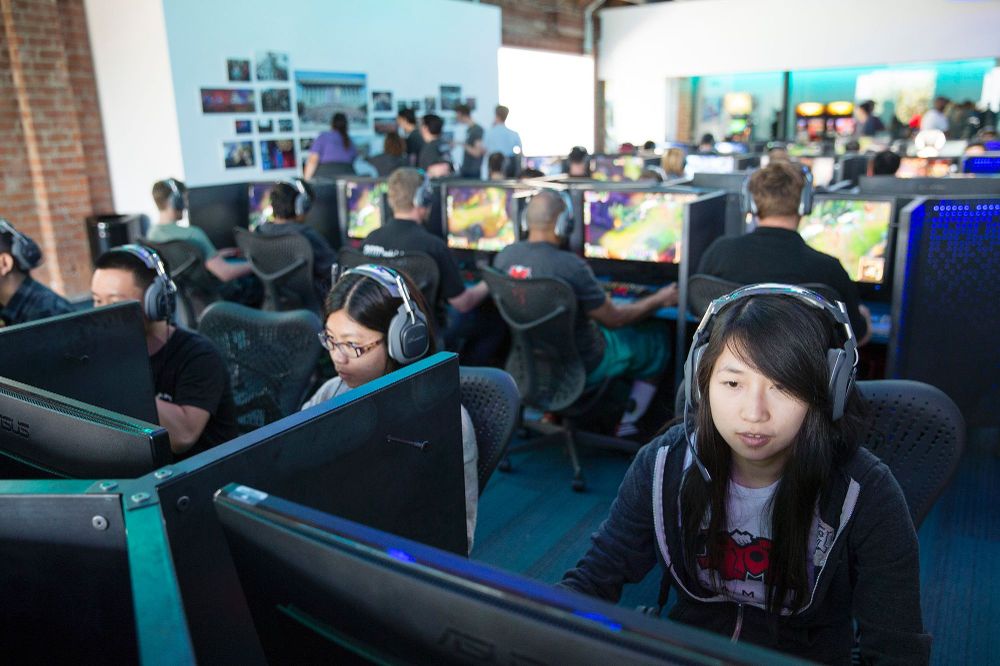 By 2011, PC Bang’s accounted for around 19 billion dollars of annual revenue in South Korea. At any given time, these PC Bang’s where serving a million users every day. They became so popular, and after a few unfortunate late night incidents, that that same year the government had to institute a curfew for underage players. Any person under the age of 16 was not allowed at PC Bang’s between midnight and six AM.

For the rest of the gaming public though, PC Bang’s are a 24-hour thing.

But Internet Cafe’s didn’t just take root in South Korea. They began opening in Japan in the late 90’s and early 2000’s, often used as a main source of Internet access for the public. And just like South Korea, Japanese Internet Cafe’s were open 24 hours a day, with extremely reasonable rates to stay there for hours at a time. But unlike the large open spaces in South Korea, these cafe’s offered private or semi-private spaces. Most computers were put inside of a small booth, not super big, but enough to move around a bit.

In 2007, Japan’s Ministry of Health conducted a survey and found that thousands of people were actually living in Internet Cafe’s. With lack of affordable housing options and the rise of part-time employment, some people turned to Internet Cafe’s, where they found a cheap, private space that was open all night. Some turned to the cafe’s a temporary living situation, moving in for a day or two, maybe a week. Others found their resettlement more permanent, living in a single room with a computer and barely enough room to lay down flat, for months at a time.

PC Bang’s are still huge in South Korea. Over the years they became the scene for gaming tournaments, offering users rare items in games for playing in this PC Bang or that one. Many gamers in South Korea do not even own any games. They play them exclusively in PC Bang’s, usually with a group of friends. They offer a space that is unique and fun, and even though people seem to be glued to their screens, fully alive.

”When you go to the Internet and you read about Judaism, you go straight to the intellect and the stereotypes […]