The Power of the Pixel

A lot can be done with each pixel on a website, but only a few people have tried creating websites one pixel at a time.

This week’s edition is brought to you by the humble pixel. The digital lego. The stuff websites are made of. The construction and orientation of these pixels on an ever-changing landscape of devices might feel like shifting sands beneath our feet, but it remains the indivisible atom of digital design.

This is mostly about how two projects, over 10 years apart, transformed the simple pixel. Both were short lived though fairly widespread. Both were created as web experiments, a simple premise that snowballed into far-reaching social implications. In the end though, both were left with an artifact greater than the individual sums of its components. Some might even call it art.

Selling Off the Pixel

All Alex Tew wanted to do was pay for some classes at University. It was 2005, and he was getting ready to start a three year degree in business. His account had recently overdrafted, and he had no idea how to get some more cash. But he had heard about the web. And deep down, he knew there had to be a way to make some money from it. Driven by this singular purpose, Tew concocted a clever little concept.

The idea was this:

Step 1: Lay out a million pixels in a single grid on a website
Step 2: Sell each pixel for exactly 1 dollar
Step 3: Massive, massive profit

It was called the Million Dollar Homepage. For just one dollar, the site promised, one could “own a piece of history!”. Tew later admitted that he went with dollars, instead of British pounds, because it had a nice ring to it. Who doesn’t want to feel like a million bucks?

Tew laid out some ground rules of course. Pixels had to be bought in 10×10 blocks, each valued at $100. Pixels bought were guaranteed to remain unchanged for 5 years after they were purchased (August 25th, 2010). And each block had to link to somewhere. But that link, and the use of the block’s pixels, were completely up to the owner. Which at the end of the day, meant mostly ads. 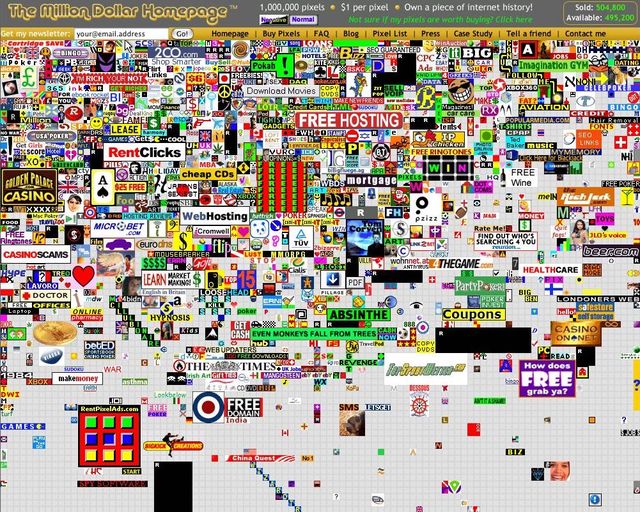 In 2005, there were plenty of experiments on the web. And plenty of ads. But no one had ever done anything quite like this, at once clever, catchy and almost naively capitalistic. But it totally worked.

In so much as a website could spread to every corner of the web in 2005, the Million Dollar Homepage did. It was picked up the press, and Tew was hailed as the “million dollar student.” Some folks saw the site as a unique and playful and a clever interpretation of the web. Others argued that the site was petty and exploitative and had no place on the web at all. Honestly, that was all up to debate. Which made the site divisive. And because it was divisive, it was popular. In under a year, the site would get around 2 million visitors and purchases from over 2,000 buyers. At one point pretty early on, the site even had to defend itself from a DDoS attack and ransom attempt.

And then, after a couple of years, traffic just kind of stopped.

Because the Million Dollar Homepage was a flash in the pan. It was never meant to last, and it had more or less accomplished its expressed purpose of making its owner a bunch of money in just a few months. Its legacy is really that of firsts. First to use ads that way. First to attract that many users that fast. First to see the web through the lens of gimmicks and amusement rather than communication.

Over the years, Tew tried to replicate his success, first with the knock-off Pixelotto, which attempted to pay users to click on ads arranged in a similar grid, and then with One Million People, a Facebook port of the Million Dollar Homepage idea, just with faces instead of pixelated images. But none followed the rule of firsts. And none went very far.

Today, Tew spends his days as founder and CEO of the meditation app Calm. After all that fervor, Tew could probably use some relaxation.

As for the site itself, it now stands as little more than a testament to link rot. The site is still up, and has all of the same pixels and links it did back in 2005. But most of those links end up in a 404, an echo of a time long gone.

Each Pixel With a Mind of Its Own

Twelve years after the Million Dollar Homepage, a similar, yet altogether different idea emerged in the offices of Reddit. Its goals were (loosely speaking) social disorientation by way of community cooperation. It was launched as an April Fools joke in 2017. It was called Place.

The premise of Place should, by now, sound pretty familiar. Lay out a grid of 1000 x 1000 pixels, a million in all. But that’s where things diverge. For a period of three days, each Reddit user had the opportunity to edit the grid, by changing the color (from a limited palette) of a single pixel, one at a time. Here’s the catch. Each user could only edit a single pixel once every five minutes.

That’s it. Reddit dropped the grid on a webpage, and just watched what happened. Over the next 72 hours, what emerged was a sociological quandary balanced only by the push and pull of a team effort. 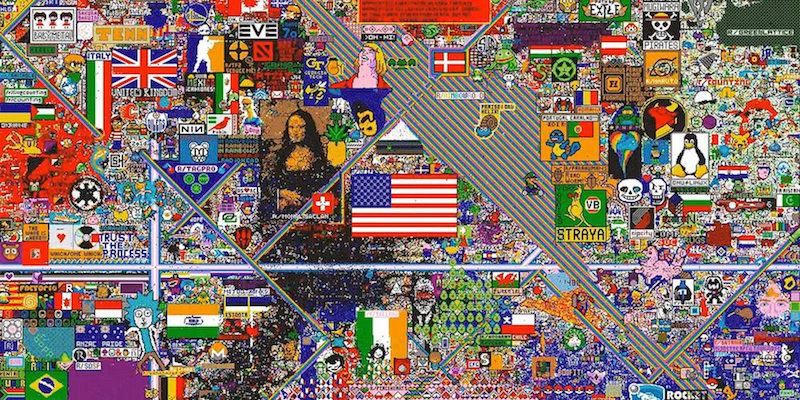 Users quickly realized that to draw anything beyond just dots on a grid, they would have to work together. Small squads began forming in the Place subreddit, experimenting with gridmaps and collectively drawing crude (and sometimes inappropriate) sketches.

But then things got more elaborate. One group drew some pretty detailed Pokemon characters. Others started plastering the grid with colored logos, and an ambitious group even went about meticulously recreating Starry Night and the Mona Lisa pixel by pixel. The Place collective even learned how to spell out short messages, and one redditor took advantage to draw out a wedding proposal.

These drawings, though, appeared and then receded, flanked by an all out war between a growing number of factions. Over in the right corner, an entire team got together with the goal of plastering the grid with blue pixels. In the top-left corner a similar cadre of green pixel supporters echoed back. Then there was those that got together to create flags of various nationalities, or homages to famous movies and cartoons. A final group even tried to destroy it all, with the ultimate goal of turning all of Place the color black.

On April 3, 2017 Place came to an end. Over a million individual users edited at least one pixel on the site, and all in all, over 16 million pixels were added or swapped out. It was… interesting. And the web is the only medium in existence that could have supported it.

There’s plenty of data about the chaos that occurred in Place. Some of it maps neatly to our preconceived knowledge of the world (Dutch users favored orange tiles, German users black, yellow and red). Other phenomena are impossible to explain, like why 320 pixels were simply never edited at all. In the end, it’s probably likely that Place simply mirrored its users. At times predictable, but en masse, erratic.

Which is to say, the pixel is self-contained and more or less meaningless on its own. But when mashed together and combined with our ingenuity, it can become something else entirely. It’s easy to forget, but as consumers and creators of the web, we deal in its currency. Just think about that next time your pushing pixels around.

Pixel Art Finds Its Home on the Web