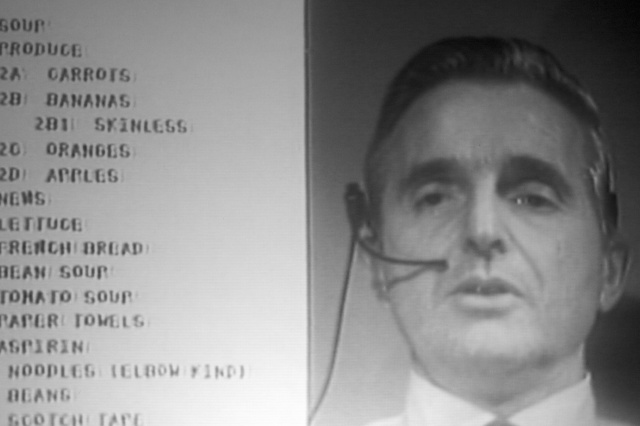 A Brief History of Hypertext

Hypertext simply means text that links to other text. It’s a concept that predates the web by several decades, though experiments with hypertext inspired its creation.

On December 9, 1968 Douglas Engelbart took the stage at the Fall Joint Computer Conference in San Francisco to demo the oN-Line System (NLS), a project he had been working on at the Stanford Research Institute. In the days and years to come, his presentation would (quite aptly) be referred to as “The Mother of All Demoes.”

In the course of just 90 minutes, Engelbart exhibited technology that would define the computer programming world for years to come. For the first time ever, the world was introduced to the computer mouse, word processing, advanced graphic displays, collaborative editing, and video conferencing.

Buried throughout his presentation, Engelbart would often jump from one screen to the next using dynamic links. He could type the name of a file, or click on one of these links and jump to a brand new document. For many, this was the first time they had ever seen hypertext.

Hypertext, broadly defined, is a document which contains links to other documents. Pretty simple in theory, but it’s a concept that has echoed through the minds of innovators for over a hundred years.

Engelbart did not invent hypertext. The word itself was used first by Ted Nelson as early as 1965. Nelson planned to use hypertext extensively in his own Project Xanadu, a storied, ongoing, 50+ year effort that may never be fully complete. What Engelbart did show, however, was just how important hypertext would be for computer systems.

If you talk to Engelbart or Nelson about their influences for hypertext, the name that will come up most often is Vannevar Bush. Bush published an article in the Atlantic in 1945 titled “As We May Think.” In it, Bush posits the creation of a system called Memex, which would use the technology of microfilm to store a cohesive record of the entirety of human knowledge. He asks his readers to imagine the ability to store encyclopedias of knowledge in a device the size of a matchbox (a far cry in 1945). But Bush’s key insight was the Memex’s ability to link together these archives associatively. He wrote:

It affords an immediate step, however, to associative indexing, the basic idea of which is a provision whereby any item may be caused at will to select immediately and automatically another. This is the essential feature of the memex. The process of tying two items together is the important thing.

If that sounds a lot like a hyperlink on the web, then you can probably see where I’m going with this.

Stretch back a bit further, and you can draw a line from Bush to H.G. Wells, who took some time after writing novels like War of the Worlds and The Time Machine to write World Brain, a collection of essays, in 1938. Wells imagined a world in the not too distant future were all of human knowledge would be easily accessible. By networking that information together, it would be possible to create a collective intelligence far greater than any individual one.

In the course of sharing these ideas, Wells attended a conference in Paris to urge the world’s greatest thinkers to take on the challenge of cataloging human knowledge. The conference was organized by Paul Otlet, a Belgian entrepreneur who had been laying the groundwork for hypertext for his entire career.

Otlet had embarked on a project he called Répertoire Bibliographique Universel (The Universal Bibliography). Otlet assembled 15 million index cards each with a small bit of information. He was able to link these together using a variation of the Dewey decimal system. But Otlet didn’t stop there. For the rest of his life, he continued to work with newer and newer technology, hoping to more effectively connect it all together.

It would’ve been hard for even Otlet to imagine that something as well-suited to his ideas as the computer would come along so soon.

When the computer, and more importantly the Internet, did come along it brought brand new possibilities for hypertext. An entire encyclopedia stored in a matchbox no longer seemed like fantasy. In fact, it was almost a certainty.

After Engelbart, researchers all over the country began to experiment with hypertext, though it was mostly confined to the halls of academia. In 1987, without warning, Apple changed that when they released Hypercard and bundled the software for free in all Macintosh computers.

The concept behind Hypercard was stupendously simple (it’s original intent was not even to be a hypertext application). Information in Hypercard was stored on digital cards. Any kind of data you could imagine could be added to these cards – text, checkboxes, lists and the like. Hypercard’s breakthrough, however, was that these cards could be easily linked. Navigating through information was as easy as clicking through links. The ability to tie two pieces of information together, as it turns out, was a powerful one.

Then, a newcomer came to the table. Tim Berners-Lee, while working at CERN, began experimenting with hypertext as early as 1980. He built a system for researchers to use there, similar to a modern day wiki, which used a new hypertext markup language to link together important research documents and create a new way to track projects and important findings.

Berners-Lee was working on a first version of HTML (Hypertext Markup Language). Combine this with the power to assign any document an accessible URL, and a simple protocol to link everything together and you have yourself the World Wide Web. And hypertext was there, to bind it all together.

So just remember. That simple link you just clicked without even thinking about it was forged throughout modern history.

The Web's First (And Second) Browser