The Unlikely Pioneers of the Early Web

How many websites are there?

That’s not an easy question to answer. The web is, by its very nature, decentralized and global and super difficult to properly account for. A feature that we’re more and more finding is both a blessing and a curse. Best estimate for that number right now (at the time of publication) is just north of 1.8 billion total websites. That’s an enormous number when you consider that just over ten years ago, in 2006, the web was first celebrating 100 million total websites online, a couple of orders of magnitude below our current number. Go back ten years before that, and that number was more like 100,000.

The first website (pictured above) was built by the web’s creator, Sir Tim Berners-Lee, while he was still working on the World Wide Web project at CERN. The site was both a source of information about the web and a demonstration of the World Wide Web itself. It was simple and stark, containing only a brief explanation of the project, a short vision of what it could be, and a few links to different pages to explore. If you’re a frequent reader of this blog, you’ll know that those links were mighty important. Important because hyperlinks are what set the web apart from other Internet technologies; they were a massive selling point of the early web. The idea that you could stitch documents together that were accessible from any computer, with any operating system, was fascinating and groundbreaking. So the first webpage was mostly just links.

(By the way, thanks to the efforts of a few dedicated web folks, you can now browse the first website ever made, in conditions that basically approximate how it was experienced all those years ago. More here.)

There’d only be one other website built in 1991, by the Dutch National Institute for subatomic physics known as Nikhef. It wouldn’t be until 1992 that the third website ever made went up, this time by the Stanford Linear Accelerator. Starting in universities had become something of a tradition with computer technology, dating back to the very first computers that came online, and continuing with the ARPANET project, which would eventually become what we now call the Internet. So it’s really no surprise that the first web tinkerers were curious academics, using it to share small packets of text with a subset of other people who were just as curious. Mostly, they experimented with the technology behind the web without quite realizing what it would eventually become. At one point, because of this obsession with tech, there were even more browsers than websites.

Not for long though. Midway through 1992, there were less than a dozen websites out there. A year later, in June of 1993, there were around 130.

The next wave of web pioneers mostly came from outside of academia. They were amateurs, hobbyists, entrepreneurs, with a single thing in common. A passionate draw to the World Wide Web and the drive to take a huge bet on it. They were strangely close-knit for what was effectively a small group congregating on the world’s broadest and most far reaching global decentralized platform. But people found each other, and began cobbling together pieces of the web’s future.

One of the more unlikely members of this cohort was MTV VJ Adam Curry who discovered the web as the first few hundred or so websites were coming online. He was drawn to the web not because it was a great place to share research papers, but because it was a great place to hang out, chat, and pass around bits of ephemera and pop culture. Curry realized that snatching up MTV.com would be like having the coolest “vanity plate” (his words) on the block, so after getting permission from the higher ups, he fronted the cash for the domain name and server and threw up an unofficial website for the MTV.

Side note: about a year later MTV would finally realize the mistake it made letting someone else own their domain name and sue Curry to attempt to wrest control. The case would expose questions of authorship, copyright, and trademark in domain name registration that remain mostly unanswered to this day. Curry ultimately settled out of court.

The site was extremely popular, with a mix of engaging landing pages and tidbits of news ranging from music to TV to Beavis and Butthead. Curry would often mention the site on his show and would sometimes ask his viewers to submit their MTV votes by email. Before long, the site was boasting tens of thousands of visitors every month. This at a time when there wasn’t much more than tens of thousands of people accessing the web total.

The web though, had a kind of draw to it. Many of you reading this newsletter have probably felt something similar. There was a feeling about it. When you went online for the first time you felt like, maybe I could do that too. That’s how the web was built. Brick by brick by strange bedfellows willing to take a chance together. Whenever a new domain went up the entire community cheered from the sidelines, then went back to work trying to make something even better. To one-up one another in a race of experimentation. Each new website mattered and spread to an increasingly growing audience.

Not long after Curry’s site went up (but before his legal troubles), in early 1994, Kenneth Cukier pulled off something similar for The Economist. Cukier wrote for the publication and took their lack of an online presence as a personal challenge. Like Curry, Cukier paid for what he needed out of pocket, around $120 as he recalls and mostly just supplies at Kinko and a bit of money for an Earthlink server. The site mirrored Cukier’s branching passions, a mix of articles from The Economist alongside tools for exploring the larger web, links to portals, embedded search engines, a site that in itself spread the gospel of the web to its visitors through sheer curiosity.

This cheaply crafted site nevertheless went on to become one of the more successful destinations on the early web. It was consistently ranked higher than its more heavily funded competitors, and introduced a lot of Economist readers to the world of the web. In the years to come, it would act as a blueprint for sites like Salon and Slate and other digital publications that found a new identity and purpose online.

But the strangest, and most energetic, features of the early web probably came from Robin Sloan Bechtel. Bechtel was working at Capitol Records when a cousin introduced her to the web via the Mosaic browser, complete with embedded, grainy grayscale images and single blobs of text scattered across the page. It was crude, but Bechtel didn’t care. She was instantly hooked. So when her bosses brought her in to help promote a new album from the metal band Megadeth, she saw the perfect opportunity. She was given $30,000 to make it happen, a goldmine for Bechtel and an unfathomable sum for most early webmasters.

Bechtel gathered together a group of like-minded folks from around the office, mostly designers that had never done anything on the web before, and began sketching out a concept. Megadeth was already an unlikely candidate for an early adopter of the web, but Bechtel saw through all the nerdy chatter and talk of Internet protocols and saw the human element behind it all. She realized it’s raw potential and saw it as a place for genuine connection and discussion.

While working on their latest album Youthanasia, the band had lived and recorded their songs in Arizona. Inspired by the location, Bechtel decided to create a fictional cybertown known as Megadeth, Arizona. The designers on her team mocked up a postcard aesthetic for the site, that took its cue from old Western’s while still keeping to the limited color palettes and layout options of the early web. 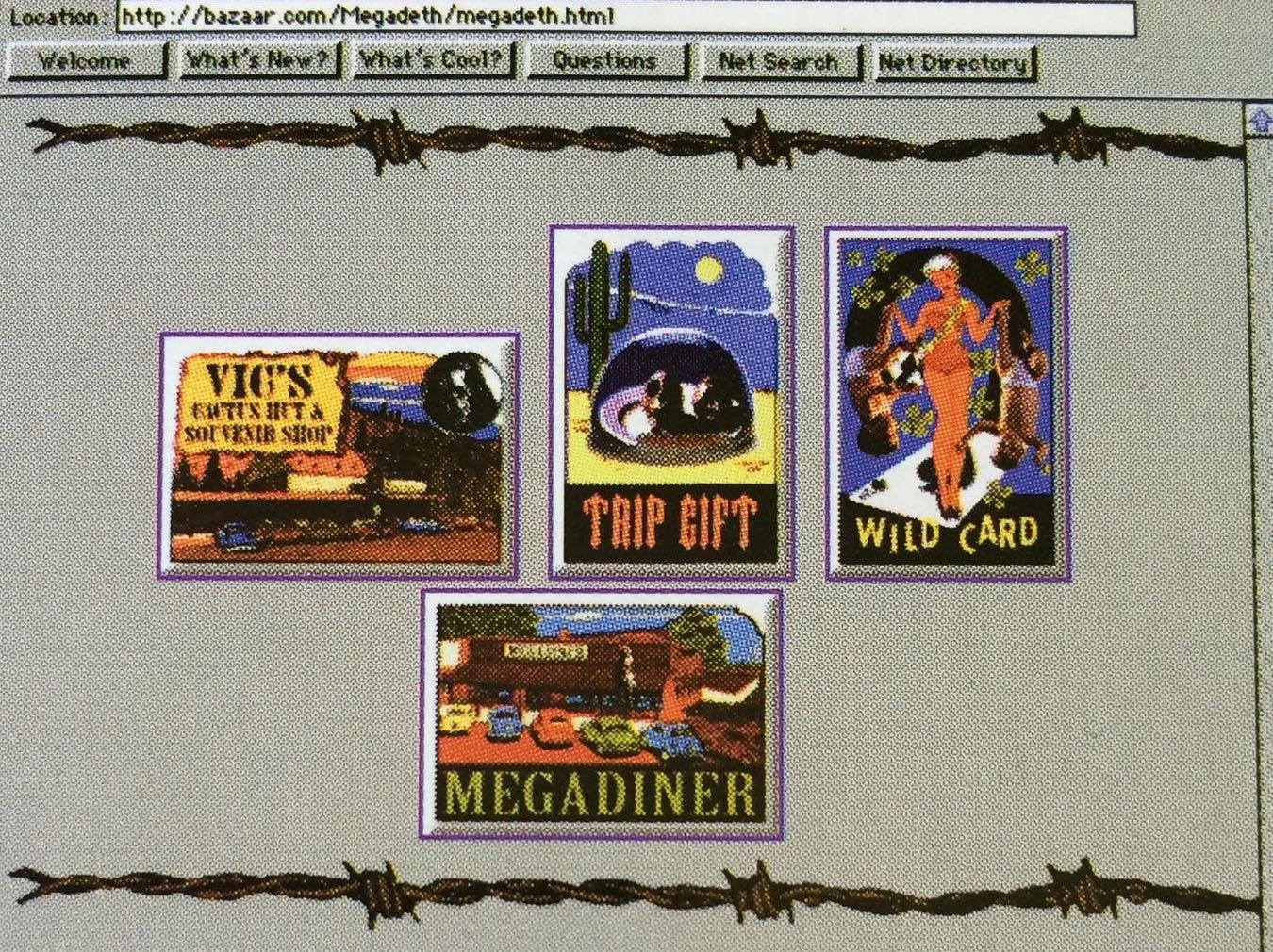 Each stylized button on the site brought visitors to a new destination, named for a different part of town. So you could go to the “drive-in” and watch video clips of the band (albeit slow-loading and extremely short) or read the “newspaper” to get the band’s latest news. The biggest draw of Megadeth, Arizona, the page that kept people coming back for more, was the “Megadiner” a.k.a. the chat room. Fans could log on to the site at any time of the day and talk about the band, or life, or really whatever they wanted at the Megadiner.

And every once in a while, a member of the band would drop by to say hi.

This was so surprising, and so unprecedented, that the first time it happened, members of the chat room couldn’t believe they were really talking to Dave Mustaine, the frontman of Megadeth. Like actually didn’t believe it. When he insisted that he really was who he said he was, a group of people got together and asked him a series of questions to try to suss out his true identity before finally being convinced. That’s how new all of this was. It was truly unbelievable.

Once the site had served its purpose, Capitol Records tried to take it down. After all, that’s what you normally did with promotional materials. You got rid of them. But Bechthel understood the importance of permanence on the web. She insisted that the site stay up, and had fans ready to back her up. So another tradition was born. Marketing sites that never go down.

It wouldn’t be until the end of 1994, shortly after the Megadeth site was launched, that the number of websites on the web would finally cross 10,000. One year later, it was 100,000. The web had assuredly arrived and soon it would become transformative across the glove. But let’s not forget the unlikely, creative, adventurous pioneers that made the web what it is today and showed us all what it could be.

The mid-2000's were often referred to as the era of Web 2.0. That may have been an overused term, but it undeniably changed the way designers and developers approached their practice through patterns.