Before the Wars, Browsers Were Everywhere

Before browsers were truly cross-platform, there was a time when each operating system had their browser of choice, and it was tailored to the needs of those users.

There’s a phrase that’s used often in the tech industry: eating your own dog food, sometimes used in an uglier, shortened form, dogfooding. It means that if you work on a product or a website, you should also be using said product or website to get a feel for how it’s working and, more importantly, what kind of problems pop up in real-world, day to day use. In other words, you should be using what you make. A lot.

The term likely dates back to a dog food commercial that aired 70’s and featured a celebrity spokesperson happily giving his own dogs the very same food he was vouching for. It found a home in tech when in the late 80’s, an engineer at Microsoft pointed out that in order to gain critical initial feedback, the team would likely have to “eat our own dogfood and test the product ourselves.” Nowadays it;s entered into a larger entrepreneurial vernacular, so you may have heard it before.

It also typically goes hand in hand with another concept known as scratching your own itch. Building a product or service or website that you yourself would like to see in the world. Paired with the aforementioned dogfooding, this generally means that a product’s creators are also its primary audience and most prolific users.

There are many famous examples that pair the two concepts. The project management tool Basecamp came from a similar ethos. And the messaging application Slack was a result of game developers creating a product on the side that they themselves loved to use. More relevant here, the World Wide Web was one of these itch-scratching, dogfooding expeditions. And so was the very first browser for the Mac, known as Samba.

Robert Cailliau created Samba at CERN, the same place Tim Berners-Lee conceived and built the first iteration of the World Wide Web. Calliau was responsible for convincing the higher-ups at CERN that investing time into the web was a good idea. He would later bring that same zeal to the world, organizing international events meant to promote and spread the web beyond the physics community. Calliau also happened to be a programmer and an avid Mac user.

Using Berners-Lee’s NeXT browser as a template, Calliau built a graphical browser for the Mac, originally called MacWWW. Nicola Pellow soon came on to help Calliau after she had finished work on the first cross-platform line mode browser. Together they tweaked the interface and eventually released the browser, now called Samba.

Cailliau wished to see a Mac browser in the world so that’s what he built. That’s scratching your own itch. He used it on a daily basis to access the web, and made improvements and squashed bugs any time he came across them. That’s eating your own dog food.

Tom Bruce, a technology director at the Cornel Law school, found himself in a similar spot. In 1992, he co-founded the Legal Information Institute (LII) at Cornell, a website and web server that featured law-based news, downloadable documents (including a hypertext version of the U.S. Constitution) and a number of important legal precedents and Supreme Court decisions. Bruce embraced the web early, far earlier than most of his colleagues. He wanted to make sure that when lawyers started logging online, they would have somewhere to go.

There was a problem, though, that Bruce was quick to notice. Most lawyers used Windows and apart from Pellow’s line-mode browser, which was built with computer scientists in mind, there wasn’t a great browser for Windows users available in 1992. Bruce scratched his own itch and he made his own. He called it Cello.

Cello holds the distinction of being the first graphical Windows browser. Bruce did not back it wall to wall with bells and whistles, choosing instead to focus on a few nifty features that helped him do his job better. Cello could print HTML pages in a friendly format. It had bookmarks and, eventually, advanced image support. It’s best feature, though, wasn’t a feature at all. Bruce knew that even digitally minded lawyers wouldn’t want to wade through technical documentation to get set up. He made it easy to install and that made Cello a popular browser.

Day to day, Bruce ate his own dog food, using his own browser to view the web. He shared Cello with a few colleagues and eventually posted it to the web mailing list. Bit by bit, he made improvements as he found issues. The progress was, at times, slow, but Cello became the browser of choice for most Windows users anyway.

When Mosaic first came out with a version for Windows, Bruce didn’t feel particularly threatened. Mosaic was the browser of choice for many Unix users, but it wasn’t able to gain much ground on Windows, due mostly to the fact that it was incredibly hard to install and required users to edit system files just to get it running. Besides, Mosaic for Windows was being maintained by essentially one person at the University of Illinois following the same dogfooding path as Bruce at Cornell.

Things changed in May of 1994, about a month after Andreessen split from NCSA with a good amount of the Mosaic team in toe to go and found Netscape. NCSA had realized that they had a potential commercial hit on their hands, but no real expertise or means to distribute or sell it. Instead, NCSA chose Spyglass as a partner for commercial licensing of its Mosaic browser.  Spyglass was the obvious choice. It was founded by former NCSA employees and still had a link back to its origin. The time for a few programmers working in isolation scratching their own itch was over. The web was about to enter a new phase, and even though you likely haven’t heard much about them, Spyglass would be a big part of that.

After a thorough dissection of Mosaic’s source code, the team at Spyglass decided to build it back up from scratch, using code and features that could be shared across all platforms. By the time they were finished a few months later, they had a browser that worked as well on a Mac as it did on a Windows computer. Or any other for that matter. They began licensing this new version of Mosaic to companies like IBM and O’Reilly to include in their software packages. It began picking up steam, in part because of these licensing deals, and even as a standalone commercial browser. 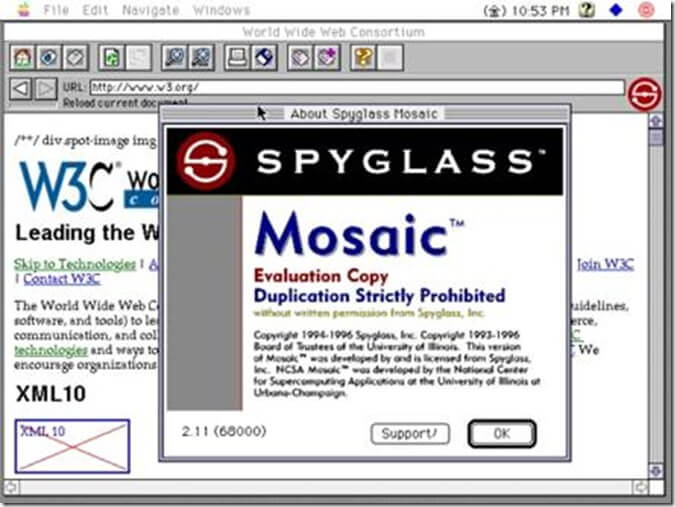 In the meantime, Andreessen and his team had managed to create a browser of similar cross-platform capabilities, Netscape Navigator. He wanted it be a Mosaic killer. It certainly chipped away at their market share becoming a browser of choice for the forward-thinking netizen. They wouldn’t be the one to kill Mosaic off though. That distinction goes to Microsoft.

In the mid-90’s, Microsoft realized that they had made a mistake keeping out of the Internet game. To skip ahead of the competition quickly, they approached Spyglass about licensing their Mosaic code for a new Windows browser called Internet Explorer. The first version of Internet Explorer was essentially a Mosaic fork, available, for a price, to Windows users.

Each time a version of Internet Explorer came out, they used a little less of Mosaic’s code and a little more of their own. And in the meantime, some of the company’s contracts began to disappear. According to a former employee at Spyglass, Microsoft then leveraged their position in the operating market to pressure other businesses to use Internet Explorer over Years later, Microsoft would come under legal fire for exactly this type of thing. By Internet Explorer 4, Microsoft had created a team of hundreds to work on their browser internally, and developed their own version without much Mosaic code left. Then they gave it away for free, and left Spyglass holding the bag. The company was eventually able to recoup some of that money in a subsequent lawsuit, but the damage was done. Internet Explorer became the official Mosaic killer.

In a world of corporate behemoths, there wasn’t much room left for the single programmer scratching an itch. Cello succumbed to competition from both sites, Internet Explorer and Netscape. Version 2 of the browser never saw public release and it fell to historical status by the turn of the century. Samba’s demise was even quicker. Once Mosaic and Netscape offered a cross-platform alternative, Samba’s popularity dramatically fell and active development ceased.

Eating your own dog food, scratching your own itch, those still have a place on the web. Some of our greatest websites were a result of these techniques. But by the time the web turned 5, the commercial world had already come to bear on the browser market. It would transform the meaning and use of the web for years, and left room for little else.

Flash is a definitive part of the web’s history. And like many technologies that get caught in the web’s web, […]