Why Do We Call it a Homepage?

The word homepage came into popular use in the mid to late 90’s, but it’s origin dates back to the web’s beginning.

On September 16, 1985, Steve Jobs was pushed out of Apple after a fraught and personal battle with then-CEO John Sculley. The day he left, he filed papers for a new company called NeXT. Jobs wanted to regain control over his products. He also wanted to get back at Apple for ousting him. NeXT helped him do both.

It took him three years to release the first version of the NeXT computer, aka the black cube. The strength of the NeXT was its incredible processing power paired with a completely unique operating system, built on top of Unix. The operating system was developer friendly to a fault. It allowed for unprecedented control from programmers and came with a host of unique features. The games Doom and Quake were originally built using that toolset specifically because of what it enabled.

The theory at NeXT was that if you could build a world-class operating system that was easy to develop with, you would attract the best developers. The best developers would give you the best software. And the best software would give you the most users. In theory, it’s a plan that worked. NeXT would eventually sell to Apple and Jobs would return to the company. The NeXT operating system would eventually be rolled into Mac OSX and help turn Apple around.

In 1989, Tim Berners-Lee got ahold of a NeXT computer thanks to the persistence and generosity of his boss at CERN. It’s the computer he used to build the first browser for the World Wide Web, which he called WorldWideWeb (not too many points for originality there, but Berners-Lee was never much of a salesman). Thanks to the features included in his OS, Berners-Lee was able to code up his browser quickly — it only took him a few months. Because of how simple his computer was to program with, he was also able to add something we haven’t really seen since. The first browser, the one created by Berners-Lee, was a read / write browser.

What do I mean by read / write? WorldWideWeb could be used to not only view websites, but to edit them as well. It had a fully featured code editor, one that could be used to markup HTML. So you could use the browser to actually publish and edit a website.

Berners-Lee imagined that each person would have their own little space on the web. They could add whatever bookmarks or notes they wanted to their page. They could make it public or keep it private. When they opened their browsers, they would be met with their personal website. And using their browser they could quickly make updates and publish changes to their site. The web, in other words, was meant to go both ways. We were meant to be both participants and consumers.

That space on the web, Berners-Lee called it a home page. It made sense. It was a digital “home” on the web. A space you could come back to and add the discoveries you made surfing the web. And that’s how the word home page began to circulate.

By the time we got to the second and third and fourth browser, the read / write capabilities were gone. It was much harder to implement a full editor inside of a browser without the features of a NeXT computer. Browsers became read only. People became simple consumers of other websites. Publishing websites required a different tool altogether and a bit of technical skill.

New websites popped up. They were created for businesses, universities, and other institutions that required a bit of professionalism. These websites stopped using the word home page, opting instead to call the first page on their site the “welcome page” or, more simply, the “front page.” Already — a couple of years in — the web was becoming a more buttoned up place. Commercial interests had crept in and more and more people were logging on. The website became less of a home, and more of a storefront.

In early 1994, a group of netizens began pushing back. They created a new kind of a website we didn’t yet have a word for. They were somewhere between an online diary and a daily log. They began with strange experiments, like Rajit Bhatnagar’s HTTP Playground a site he updated each day with what he had for lunch (foreshadowing the more banal elements of later social media). There were personal diaries, like those of Claudio Pinahenz and Carolyn Burke, were people began just sharing things about their life on their website. The details they posted each day were often minute, but they were so real and so personal you couldn’t help but come back.

And then there was Justin Hall, a chronic oversharer, by his own admission. His website, often updated several times in a day, was filled with his most intimate stories. He shared each and every detail form his life in a online stream of consciousness. He lacked a filter entirely. It was unlike anyone had seen. The web offered him a way to do more than just sell something, or advertise. It gave him a way to share a piece of himself with the world.

The crazy thing was, the world kept coming back. Hall and his peers garnered thousands of hits from regular people fascinated with the ordinary lives of others. They spawned a new generation of websites, one that was more focused on telling personal stories and sharing one’s passions. Not everybody had a diary with their greatest secrets, but people began to use the web to share what they love, be that their own lives, their favorite music or TV or movies, or their philosophical inquiries, or pictures of their cat.

When Justin talked about his website, he referred to it as a “personal home page.” In many ways, the creators of these new sites had co-opted Berners-Lee’s original idea and brought it back around. They had created their own digital home. They didn’t use a browser to build it — they had to pick up the technical skills required to publish a website — but the concept was there. 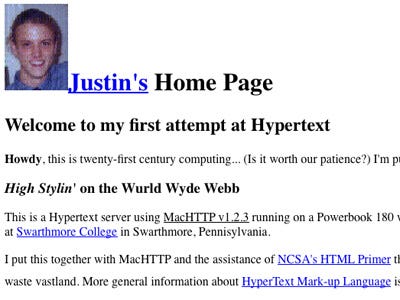 By the time proto-bloggers brought the personal website back into the mainstream, the word collapsed on itself. Home page became, simply, homepage. Suddenly, everywhere you looked, someone else had a homepage up on the web. You knew for sure because the banner at the top would call it such (i.e. Welcome to Jay’s Homepage).

There were plenty of commercial interests, but they were overwhelmed by the sheer velocity of personal sites that launched every day. Services like Geocities and Tripod and so many others sprung up to make that process even easier.

Eventually the word became so rote that people forgot why they started using it at all. General purpose websites dropped the “welcome page” nomenclature and just went with homepage. Technical tutorials were set up to show you how to create a website’s homepage. It became so a part of the web’s vernacular that everyone forgot what it meant and where it came from.

Next time you’re browsing a homepage — maybe even your own — I hope you really do feel at home.

The Web's First (And Second) Browser